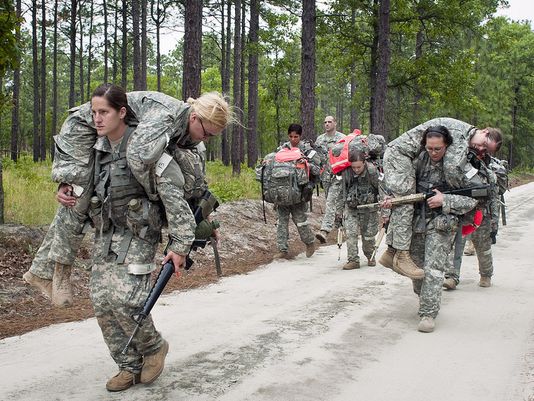 We don’t have to imagine what ISIS would do if they captured an American female on the battlefield. Kayla Mueller’s captivity and death at the hands of the perverted Islamists told us all we needed to know.

Pretending Army Rangers or Navy SEALs wouldn’t be inclined to pay special attention to protect a female in combat, despite risking their own safety and by extension the mission, defies their honor and denies science. Protecting women from physical harm is what real men do!

Capt. Kristen Griest and 1st Lt. Shaye Haver made history for being the first two women to graduate from the U.S. Army’s elite Ranger School. What these ladies accomplished was no less than extraordinary, and they should be applauded! However, as exceptional as it is, normative it is not.

I’m sorry, but if I’m being held captive in an ISIS hellhole, fully aware they’re going to saw my head off at any given moment, I’m praying to God that Chris Kyle, the Littrell brothers, Col. Allen West, or Col. Danny McKnight (retired Army Ranger of the infamous BlackHawk Down battle and Author of “Streets of Mogadishu”) will be busting down the doors to come to my rescue. Additionally, I don’t want the added guilt weighing on my conscience that one of our soldiers is being held as a sex slave because of me. Political correctness has no place on the battlefield where lives are lost or saved in an instant. The very attributes about men that radical feminists despise are the very ones that make for some of America’s finest soldiers – attributes such as stubbornness, bravado, singular focus, competitiveness, strength and athleticism, adventurism, bravery, assertiveness, etc.

At 5 years of age I can recall stealing my sister’s Barbie dolls from her room to play matchmaker for my G.I. Joes. I’d place my toy soldier on the driver’s side of my Tonka Truck and the Barbie in the passenger seat. They’d drive off into the sunset, arriving at my makeshift campground, where on occasion they were ambushed by little green soldiers and Indians. You’d be surprised at how many plastic figurines G.I. Joes could kill in just a matter of seconds. After saving his date’s life, Sgt. Slaughter would open the car door for Barbie and they’d proceed to go swimming in the extremely muddy pool. Don’t tell my sister.

Here’s the point: Boys are born with a God-given nature to protect in times of tumult and chaos. I’ll even go so far as to say that a man’s ability to protect a woman or himself gives him a sense of purpose and satisfaction in life that is virtually unparalleled. Again, it’s not sexism. It’s science.

Consider these names: Alek Skarlatos, Spencer Stone, Anthony Sadler, Chris Normal and Mark Moogalian. Who’s missing from that list? I’ll tell you. It’s all the names of the women that did not thwart the jihadist attacker that boarded a high-speed French train last Friday. If we’re honest, none of us would expect a woman – exception being Ronda Rousey of the UFC – to risk her life to save others as men stand idly by.

It’s a soldiers job to kill people and break stuff, and to do so decisively. Right now, a liberal is calling me an idiot for writing that last sentence. But the problem with the left is they project and even force their worldview onto Islamists. In other words, they expect terrorists to think and behave like Americans. In times of war, we want our enemies’ grandchildren telling the stories of what happened to their ancestors when they messed with the U.S. Unfortunately, ISIS and Iran will be telling their children less than flattering stories about the “Great Satan” and how they tormented our hostages. Women have always played valuable roles in our military. But leave our Special Forces to the men!

While many women elect to be stay-at-home moms for their kids, over the last several decades they’ve proven time and again that they are capable of doing many of the same jobs men do. When it comes to our Special Ops fighting forces, however, lets abandon political correctness and stick to the science; no one can break or kill things like men. Muscles and genetics matter. Let’s stop pretending otherwise.