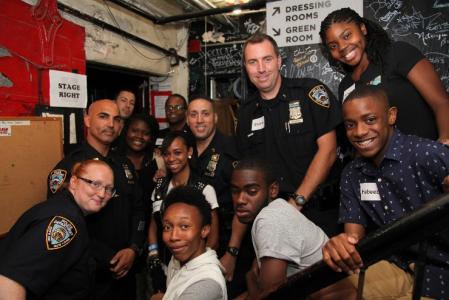 Far too often white cops are the first respectable male authority figures young black males come in contact with. Unfortunately, by the time they meet, seven out of 10 times the black suspect has never had a father figure to love him and guide him through life. Therefore, it’s incumbent upon law enforcement to discipline him when the stakes are higher. Imagine that first impression.

Wearing a badge in America’s inner cities isn’t enough to garner respect. Due to the lack of fathers in the ‘hood, today’s cops have to be social workers, pastors, life coaches, Santa Claus at Christmas, relational counselors on domestic violence calls and, of course, police – leaving many ill equipped for their job. On top of all of that, their public image is being purposely tarnished by the left-wing media and the Obama administration, who have strategically used false racial narratives surrounding the deaths of Trayvon Martin, Mike Brown and Freddie Gray to keep blacks mad so they’ll vote for Democrats again in 2016. The hashtag #BlackLivesMatter has become a symbol of frustration from blacks who are fed up with perceived widespread police brutality, but more dangerously, it’s become a death sentence for our police around the country.

How do we remedy that? It’s going to be a long process to undo what the left has done to our cops – destroyed their reputation. However, I believe there’s hope. Here’s anecdotal evidence from my own life:

Growing up in Los Angeles, I hated cops! In hindsight I realize it wasn’t for anything they had done to me, but due to stories I’d heard growing up with my peers, or things I watched on television and movies. When NWA (Niggaz With Attitudes) came out with their hit single “F@#% The Police,” my friends and I sang it like it was going out of style. When we saw one of LAPD’s black and white squad cars pass by on the streets, we’d sing it as if we were in a school choir, staring them down until their car disappeared out of sight. On a occasion when we were stopped by the cops, either for ditching school or at times for dressing like gang members, I can recall thinking “only if these punks didn’t have their badges.” We mocked their motto “To protect and to serve.”

The streets taught me that police were against me, not for me. As a result, I looked for opportunities to justify my hatred toward them. In one instance, two truancy officers, one black and one Mexican, stopped my friends and me while we were walking. They asked if we’d ever been arrested. We said no. They responded by saying, “That’s surprising, most kids we pick up have.” Those words left an indelible impression on me. I already believed minority cops were “sellouts,” but now I believed they didn’t think highly of me, either. I know now that they were just speaking to the realities of my neighborhood. However, for young black men without dads or a role model, those words are often prophetic.

Having said that, all of us need our cops! We should be blessing and praying for safety and wisdom for those who protect our neighborhoods daily. The Bible teaches us in Romans 13:3 that we don’t have to hold any fear for the one in authority (cops in this case) if we do what’s right, but we should fear them when we do evil.

What the #BlackLivesMatter movement doesn’t care to understand is that there would be fewer blacks alive today were it not for cops. In his article “Urban Areas Seeing Spikes In Homicides,” Matt Vespa unveiled the rising murder rates in our big cities, due in part to violent criminals settling their own disputes and cops that are too afraid to do their job due to the national scrutiny and backlash every time there’s a physical altercation or shooting with a black thug.

Inner-city relationships with police had come a long way since NWA arrived on the scene and the Rodney King beating. I believe there are long-term solutions cops and blacks can do to restore mutual respect for another, starting with abandoning the extremists like President Obama in the Democratic Party who live to stir up division between races. Here are a few more solutions:

Kindness leads to repentance. We have to find ways to be kind to one another.