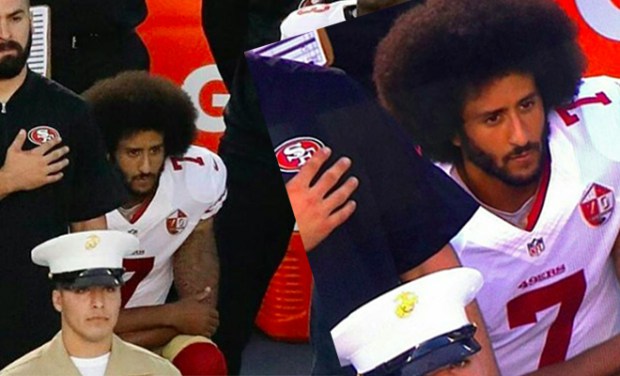 Colin Kaepernick, backup quarterback for the NFL’s San Francisco 49ers, landed an endorsement deal for a new sportswear clothing line called “Under Performer,” not to be confused with Under Armour. Cheap shot? No more than his refusal to stand for the national anthem for four consecutive pre-season football games.

Apparently, the $114 million slave is oppressed and upset that blacks are being unjustly shot and killed by cops all across the country – a narrative that is a bald-faced lie perpetuated by the Black Lives Matter movement! In fact, we now know that whites are nearly 20 percent more likely to be shot by police. You have to understand that Kaepernick is struggling with feelings of white guilt, white wealth and relevance – nothing more, nothing less.

First, let’s deal with Kaepernick’s white guilt. Have you ever noticed how often blacks that attend universities arrive on campus hopeful and optimistic about their future in America, yet leave as “oppressed” Marxist elitist social justice warriors? Cases in point: President Barack Obama and Colin Kaepernick. Additionally, if you’re not biracial, what you may not know is how difficult it could be growing up and feeling like you don’t quite fit in with any one ethnic group. When Kaepernick decided to sit while the national anthem played, what we were witnessing was an insecure grown man that has never come to grips with his mixed heritage. He still wants to fit in! At this point in his life, he’s finally accepted he has dark skin, Muslim leanings and a platform. He’s made a decision to be “black.”

However, coming to grips with his “blackness” has caused other issues to surface. One being that he’s extremely wealthy and privileged. Colin Kaepernick’s white biological mother gave him up for adoption as a baby after being abandoned by his biological father, who happened to be black. Don’t feel too sorry for him. A loving white couple, his adoptive parents, the Kaepernicks, loved him and raised him as their own, affording him opportunity to become who he is today. Unlike nearly 75 percent of black children, Colin Kaepernick got to grow up in a loving two-parent home that gave him the security and confidence to chase and capture his dream of playing for the San Francisco 49ers. Yet, this isn’t good enough for him! Why? He’s burdened by the guilt that he in fact has not been “oppressed” like his BLM peers and that he’s extremely successful. The guy can’t live with himself!

Colin Kaepernick hoped to find his identity and happiness in sports. As a result of his poor performance on the field over the last couple of seasons, however, he didn’t. Given the fact that his NFL career may be coming to a screeching halt, he’s desperate for relevance. What do you want to bet that Kaepernick is also banking on the politically correct NFL to save his career for fear of offending other black athletes?

Bottom line is Colin Kaepernick’s protest will do more to hurt race relations in America than heal them because they’re not rooted in reality. Millions of minority kids that looked up to him will grow up with a false impression that a cop will kill them, instead of believing that if they work as hard as Kaepernick, they too can be successful.

Hopefully, he’ll be cut and he can go worship Allah out of the spotlight so he won’t damage anymore black kids who want to be like him.