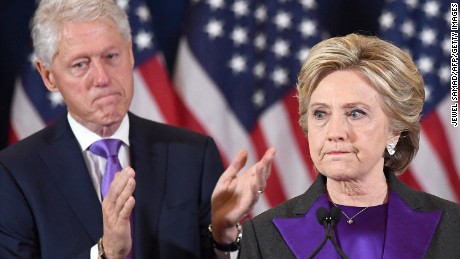 I never could’ve voted for her, for the first time in my adult life I felt empathy for Hillary Clinton. She was no longer the “Crooked Hillary,” as Donald Trump coined her. I found myself impressed and appreciative of her humility in defeat. She was real, authentic and poised. For a brief moment in history, the allegations that she has ice flowing through her veins felt exaggerated. She lost, and she was visibly shaken.

By delaying her concession speech Hillary Clinton illustrated that she was normal, human, dare I say it, female. The long and grueling campaign took a toll on her emotionally and physically, as it does every candidate, but her reaction to defeat was historically different, unexpected, unique. Whether she meant to or not, Hillary proved what radical feminists like herself have denied for decades – men and women are different, and that’s a good thing despite the left’s insistence on arguing to the contrary.

After the votes were tallied and it was clear that Donald Trump, not Hillary Clinton, would be the 45th president of the United States, Hillary escaped from the limelight to gather herself. It took her until Wednesday afternoon to re-emerge to deliver her concession speech. The reason she disappeared is obvious to those of us who haven’t fallen prey to left-wing propaganda that claims it’s sexist to expect women to act like women, despite the fact that God created them differently. Routinely, after every presidential election, it’s imperative that the loser concede the race immediately for the sake of uniting the country as quickly as possible after a contentious campaign. Additionally, it showcases to the rest of the world that we are not a banana republic. However, nothing about this election cycle was “routine,” except for Hillary’s reaction to defeat.

It’s a shame society has taught women that in order to achieve like a man you have to act like a man. Women in America have been busting through “glass ceilings” for decades. It isn’t uncommon to see female CEOs of major companies, like Meg Whitman of Ebay, or former presidential candidate and Hewlett Packard CEO Carly Fiorina. Supreme Court Justices Ruth Bader Ginsburg, Sonia Sotomayor and Elena Kagan come to mind. We have the WNBA (even if no one watches). More women attend and graduate from college with professional degrees than men. Women tend to be better and more hands-on at parenting and are thereby greatly responsible for shaping each generation. Yet, still they’re told by radical feminists it isn’t enough. If only they could gain that ultimate prize – the White House.

American girls already live in a culture where they can break virtually any glass ceiling their skills and ambitions will allow. To suggest otherwise is cruel. If anything, people that perpetuate the notion that women are somehow held back in America because of their anatomy are detrimental to their self-identity and, by extension, their confidence.

Hillary was right to say that just because she didn’t win the highest office in the land it didn’t mean that another female wouldn’t soon. However, given the huge platform she has, I wish she had gone further. Women don’t have to ride the coattails of their husbands anymore to succeed. Today, many couples meet while pursuing a career or in the workplace itself. Mass discrimination against women in the labor force is largely a thing of the past. Can we celebrate that?!

I recently read a column at Psychology Today entitled “6 Ways Women are Different From Men.” One of the bullet points addressed how differently men and women express their emotions. Women tend to wear their heart on their sleeves, whereas men tend to tuck our emotions away. There’s nothing wrong with that! But someone must’ve told Hillary when she was growing up that women shouldn’t do that. That’s likely why she retreated before conceding the race. The left has told her it’s not OK to act feminine when you’re in high positions.

I have a daughter, and as I get older I’ve had to learn to accept the fact she’s not like me. She likes “fufu” thingies. Initially, I wanted a tomboy, but she grew up loving Disney and princesses. She’s almost 19 now, and she’s excelled, in spite of her sex, at every job she’s had thus far, because she works hard and she’s not afraid to ask questions.

It’s time for the left to stop lying to the women they claim to adore. As a society, as a nation, we love you, we need you just the way you are.