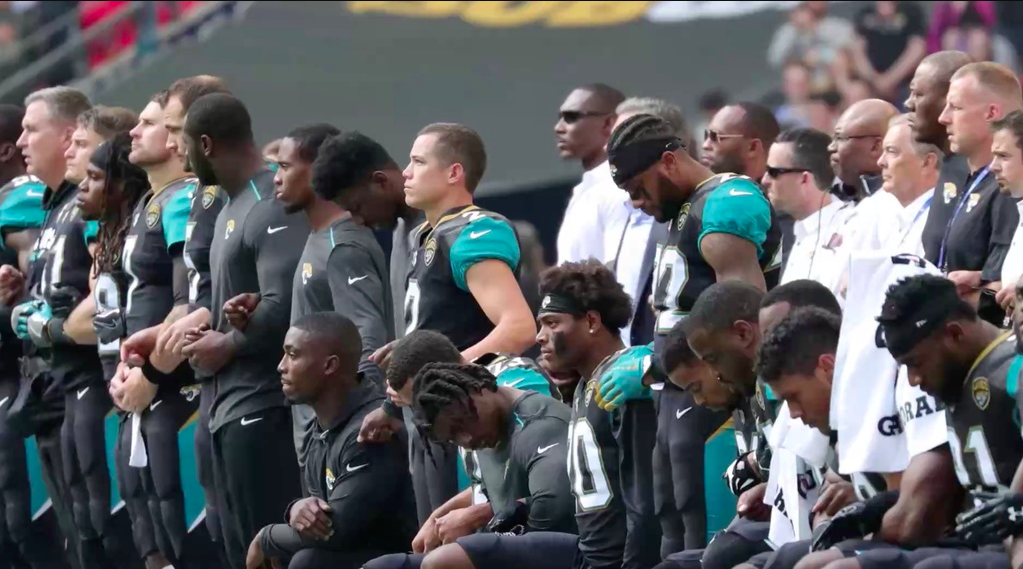 Have you ever considered just how much of the national anthem protests occurring around the National Football League (NFL) come from millennial guilt, which I contend is a byproduct of white guilt? NFL players aren’t kneeling because they’re being oppressed; they’re kneeling because they aren’t. They’ve been spoiled. They have it so good in America, they had to invent their own set of injustices to fight so their lives would feel meaningful. I blame the media and many of their college professors for these players’ sense of entitlement.

For the second year in a row I’ve decided to boycott the NFL, ever since the league allowed Colin Kaepernick to politicize professional football by refusing to stand for our national anthem. I have no problem with professional athletes expressing their grievances about the country and/or our government publicly. I have no problem with them speaking out on social, cultural and racial issues if they feel compelled to use their unique platform to do so. However, I do have a problem with where and when they decide to do it; on the field in front of paying and viewing fans is not the place. NFL ratings are down, and if the league continues to allow a bunch of multi-millionaire spoiled brats to pretend like they caught a bad break in life due to their skin color, they’ll continue to decline. No matter what profession you’re in, the First Amendment does not give you the right to advance your political views on the job.

The First Amendment specifically outlines five rights the government, not your employer (this is where far too many Americans are confused), cannot prevent you from exercising. The First Amendment prohibits the government (again, not your employer) from creating a state-run church or theocracy like we see in many Muslim nations. However, contrary to popular belief, there is no separation of church and state. In other words, the government cannot stop you as an individual or a church body from practicing your faith inside or outside of your church walls.

Secondly, government cannot censor your speech. If you’re attempting to silence speech or opinions from others that you do not like, you’re not an advocate for free speech. Thirdly, the government cannot prohibit the media, in any form, from reporting the news, particularly as it pertains to the government itself. Next, the First Amendment affords us the right to “peacefully” assemble (protest), and lastly to petition our government for a redress of grievances, more commonly known as lobbying.

Years ago, one of my older brothers and I use to work for my uncle’s landscape company. At the time, we were both new Christians. Whenever the opportunity arose for my brother to share his faith with a client, he’d stop working to do so. On occasion, I’d join him. We’d even pray for the client if they allowed us to. However, my brother began doing this more frequently to a point where he’d stop working 15 minutes or more to talk with a client. It became problematic because the rest of us had to cover his load. Eventually, my uncle had to crack down on him because he wasn’t paying my brother to evangelize; he was paying him to mow grass. Initially, my brother and I were upset with my uncle – but eventually we realized God didn’t give us a right to steal another man’s time. The same applies for NFL players who are kneeling. They’re stealing their owner’s time while imposing their worldview on the fans.

The fact that so many blacks are in the NFL in the first place is proof positive that the great American experiment has worked despite their skin color and our nation’s history concerning slavery and civil rights. White Democrats that run the media and our institutions of higher learning have done blacks a huge disservice by promulgating the lie that America is inherently racist, while ignoring the progress that has been made due to an adherence to our Constitution. NFL players who choose to kneel during our national anthem lack historical perspective.

They feel guilty that they have it so good in America, so they had to invent their generation’s own set of grievances. Yelling “racism” even it doesn’t exist is easy – cop shootings in America is the perfect example. Let me be clear: I’m not saying there aren’t racist or crooked cops, but the number is miniscule. More “unarmed” whites are killed by cops than blacks. However, you wouldn’t know this by listening to the evening news. Reporting whites killed by cops isn’t an interesting headline because whites tend not to riot and destroy their own cities. There’s no ratings bump there! Sad, but true.

President Trump was right to call out NFL players that kneel during our national anthem as well as their owners for not firing or suspending them. They’re disrespecting our flag and our troops, and his sentiments are shared by many people like myself. However, Trump was just as guilty of infusing politics into sports as anyone. That isn’t government’s role.

Weekend politics should be left to the political pundits on the cable news networks, and sportscaster should stick to sports while on television and radio. In a nation that’s so divided politically, I long for a new day when we can escape from politics and unite with our friends and family around our sports teams again.