If you follow closely the subject of hypothesized human-caused global warming, you probably regularly experience, as I do, a strong sense of cognitive dissonance. On the one hand, you read dozens of pieces from seemingly authoritative media sources, as well as from important political officeholders, declaring that the causal relationship between human CO2 emissions and rapidly rising global temperatures is definitive; declaring that “the science is settled”; and further declaring that impending further increases in temperatures over the next decade or several decades are an “existential crisis” that must be addressed immediately through complete transformation of our economy at enormous cost.

On the other hand, you studied the scientific method back in high school, and you can’t help asking yourself the basic questions that that method entails:

What’s going on here? If this is “science,” it’s some kind of “science” that turns the scientific method that you thought you understood on its head. I have previously covered multiple instances of real scientists attempting to apply the actual scientific method to the human-caused global warming hypothesis. For example, I had a post on September 19, 2016 titled “The ‘Science’ Underlying Climate Alarmism Turns Up Missing.” That post reported on a scientific paper then just out from a group of scientists led by James Wallace that concluded that the so-called “Tropical Hot Spot” (a pattern of temperatures in the tropical lower troposphere) could not be found in the temperature data, thus invalidating the basis on which the U.S. EPA had concluded that CO2-induced greenhouse warming was occurring. Another post on May 14, 2018 titled “More On The ‘Science’ Behind The Global Warming Scare” reported on another paper with Wallace as lead author that tested whether any statistically-significant relationship could be shown between the time series line of world temperatures (as measured by UAH) and the time series line of atmospheric CO2. Conclusion: “[I]ncreasing atmospheric CO2 concentrations did not have a statistically significant impact on the UAH TLT 6.0 temperature data set over the period 1979 to 2016.”

You might think that serious papers like these that seem to have invalidated the very foundations of the global warming scare would draw equally-serious rebuttals from some high-ranking people who back the global warming hypothesis. Perhaps they would point out important data that were not considered, or would demonstrate a flaw in the methodology. But you would be wrong. Instead, these and other comparable papers are simply ignored. In lieu of any rebuttal, we get endless repetition of the mantra that “the science is settled.”

The past few months bring two new and important papers into the mix. The first, from the January-February 2019 issueof a Russian science journal, is O.M. Povrovsky, “Cloud Changes in the Period of Global Warming: the Results of the International Satellite Project.” The second, with a date of June 29, 2019, is J. Kauppinen and P. Malmi, “No Experimental Evidence for the Significant Anthropogenic Global Warming.”

Some background will be helpful. Since about 2007, there has been a notable counter-theory to the hypothesis of human-caused global warming. The counter-theory is that fluctuations in world temperatures over the past several decades have been caused more by fluctuations in the cloud cover of the earth than by increases in greenhouse gases like CO2. This counter-theory is often called the “Svensmark hypothesis,” after Danish physicist Henrik Svensmark, who proposed it. The basic idea is that heavy clouds act like an umbrella and prevent sunlight from reaching the earth’s surface, thus resulting in cooler temperatures. The hypothesis then ties world temperatures to solar activity through the intermediation of cosmic rays. The hypothesis proposes this mechanism: Cosmic rays are a factor in ionization of the atmosphere, which enhances cloud formation. Strong solar irradiation produces a more powerful “solar wind,” which disperses the cosmic rays, leading to fewer clouds on the earth, and hence warmer temperatures. Conversely, lower solar irradiation allows more cosmic rays to penetrate the atmosphere, forming more clouds and resulting in cooler temperatures.

I have no position on whether this hypothesis is “right.” However, prior to the collection of data, it is a plausible hypothesis — equally as plausible as the hypothesis that increasing temperatures are mainly caused by human-emitted greenhouse gases. Accepting the human-caused warming hypothesis as proved requires rejecting the alternative Svensmark hypothesis (as well as all other plausible null hypotheses; but let’s stick with Svensmark for now).

Which brings us to the Povrovsky and Kauppinen, et al., papers. Povrovsky did something that somebody should have long since done by now, which is to collect month-by-month satellite cloud-cover data for the earth for the period 1983-2009, and plot it on a graph, and then compare that graph to the month-by-month temperature graphs. What is the correlation of the two? From Povlovsky:

[T]he correlation coefficient between the global cloud series on the one hand and the global air and ocean surface temperature series on the other hand reaches values (–0.84) — (–0.86). . . . Since the tropics are dominated by water areas, this fact suggests that the increasing influx of solar radiation primarily entails an increase in the temperature of the ocean surface (TPO). Not surprisingly, the cloud cover values themselves and their temporal trends are close to global characteristics. Thus, changes in cloud cover over three decades during global warming can explain not only the linear trend of global temperature, but also some interannual variability.

Kauppinen, et al., pick up where Povrovsky leaves off. They provide the following graph, comparing the satellite-based cloud data to temperature data for the 1983-2008 period: 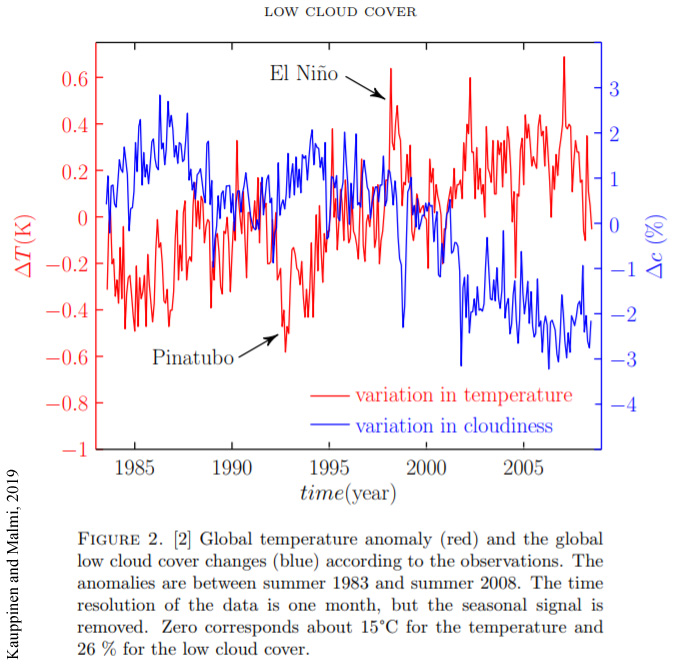 The IPCC climate sensitivity is about one order of magnitude too high, because a strong negative feedback of the clouds is missing in climate models. If we pay attention to the fact that only a small part of the increased CO2 concentration is anthropogenic, we have to recognize that the anthropogenic climate change does not exist in practice. The major part of the extra CO2 is emitted from oceans [6], according to Henry‘s law. The low clouds practically control the global average temperature. During the last hundred years the temperature is increased about 0.1°C because of CO2. The human contribution was about 0.01°C. We have proven that the GCM-models used in IPCC report AR5 cannot compute correctly the natural component included in the observed global temperature.

Note that I have not independently verified or replicated the work of either Povlovsky or Kauppinen. There could well be flaws in their work, either in the data or in the methodology. The work is now open for all to challenge.

However, both Povlovsky and Kauppinen are doing the fundamental work of science, which is to take a leading contender for an alternative causation hypothesis, and then see which of the two hypotheses is more consistent with the data. That approach stands in stark contrast to the alternative way of going about things, which I call “fake science,” as exemplified by the IPCC. That method is only to look at your preferred hypothesis, and dismiss all plausible alternatives with the back of your hand, without ever checking whether one of them might better fit the actual data. Here is something called “Climate Change 2014 Synthesis Report,” which is the IPCC’s most recent detailed pontification on the subject of what causes climate warming. At page 44 they have their only consideration of what they call “natural radiative forcings”:

That’s it. How about dealing with the Svensmark hypothesis, guys? Or cloud cover? Or the effect of CO2 out-gassing from the oceans? They can’t be bothered. They already have their pre-determined conclusion. Meanwhile here in New York, we plow ahead with plans to reconstruct all buildings, build thousands of new wind turbines, ban airplanes, block pipelines, and on and on. Madness.

The Magical World Inside Your Recycling Bin

How Rapid Growth Is Destroying the Environment