The Carl Jackson Show and Blog
Home The Blog Sports DID TRUMP SAVE THE “BIG BALLER” BRAND? 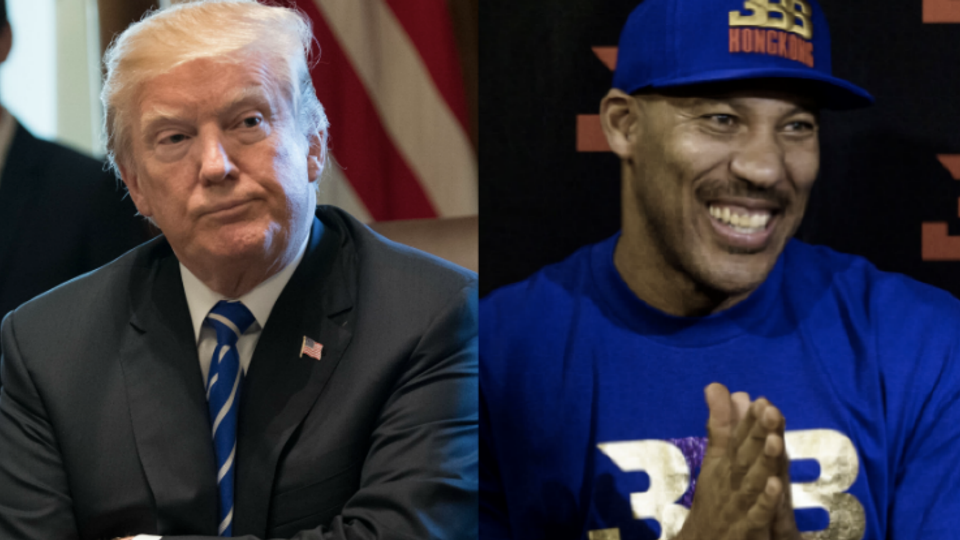 Am I the only one who believes President Trump rescued the Big Baller brand and their overpriced copycat Kobe Bryant sneakers from life support?

In many ways LaVar Ball is President Trump without the perm or the power of the executive pen. If Trump weren’t white, and LaVar weren’t black, I’d swear they were born of the same parents. They’re brotha’s from another motha’ – cut from the same cloth – 2 peas in a pod. LaVar got exactly what he wanted from the exchanges between he and the president – more media exposure.

If you are one of the few remaining Americans that hasn’t heard of LaVar Ball, don’t fret, he’ll be coming to a screen near you.

LaVar is the little brother Trump never had. In my opinion, he’s copied Trump’s loud and braggadocios style all the way to the bank. According to USA Today, over the course of five days, LaVar received over $13 million in free ad publicity during his feud with President Trump. Their back and forth began after LiAngelo Ball, LaVar’s middle son, was caught shoplifting in China with two teammates last week. LaVar refused to give Trump credit for negotiating his son’s release. LiAngelo, Cody Riley and Jalen Hill were facing 5-10 years imprisonment in China before the president intervened on their behalf.

As a Lakers fan, I want to believe the hype about the Ball brothers! Magic Johnson is my all-time favorite Lakers’ player with Kobe Bryant at a close second. For decades, I’d been hoping we’d draft another floor general as gifted as Magic, and I thought we finally had. LaVar’s eldest son, Lakers rookie starting point guard, Lonzo Ball, has been less than impressive thus far. This has caused many fans, including myself, to question if Lonzo would’ve been picked as high in the NBA draft were it not for his dad acting as his hype-man. Furthermore, fans have begun to question if LaVar’s two younger sons, LiAngelo and LaMelo, are being overhyped as well. In other words, is it their talent, or LaVar’s mouth that’s paving the way for the future NBA trio? I believe the answer is both.

Like President Trump, LaVar Ball has mastered the art of garnering unprecedented amounts of free publicity to propel his “Big Baller brand (BBB).”  Consequently, Lonzo Ball, was drafted higher than he should have been. I have no doubt LaVar will continue his antics until all of his boys are starting on premier NBA rosters, and who can fault him for that? As you may recall, before Lonzo was drafted by the Lakers, LaVar bragged that he was better than Golden State Warriors superstar Steph Curry. As crazy as that sounds, that comment made LaVar Ball a household name amongst NBA fans.

LaVar has parlayed his free media exposure into an independent shoe and apparel company, a reality show on FaceBook called “Ball in the Family,” and full ride scholarships to UCLA for his boys. All three boys committed to UCLA’s basketball program early on in their high school careers. Lonzo, was UCLA’s star point guard last year before entering the NBA. LiAngelo, who currently plays there, has been suspended indefinitely for the aforementioned shoplifting incident that occurred in China, and LaMelo, a high school junior, will arrive on campus in 2019. The brothers won a state title together during the 2015-2016 season playing for Chino Hills High in Southern California. That’s impressive by any measure.

Nonetheless, the Big Baller brand has a long-term issue that must be addressed. No one can predict if LaVar’s business model is sustainable. It’s going to require more than LaVar’s mouth to keep his company afloat. His boys have to back up his hype with their play. Lonzo Ball made a spectacular debut in the NBA’s summer league, but he was playing against scrubs. Expectations going in to the regular season were extremely high due to the pressure his dad placed on him.

Sadly, because of LaVar, Lonzo isn’t going to get the grace period to develop his game that he would otherwise. Frankly, this is where President Trump comes into the picture. He threw a struggling brand, the Big Baller brand, a lifeline last week by feuding with LaVar, who frankly needs every headline he can get to sustain his brand.

LaVar must realize, basketball fans aren’t like football fans, particularly when it comes to purchasing apparel. We want stars, the team shield isn’t enough. Football fans are loyal to teams; we’re loyal to stars on our team!  I might be willing to shell out cash for a Magic, Kobe, Kareem, or Shaq jersey, but Lonzo hasn’t shown me anything yet. Conveniently, LaVar’s feud with Trump came just in time for Black Friday and Cyber Monday, but those only come around once a year.

LaVar deserves props for raising good boys – for the most part. However, it’s time for him to cut the cord on Lonzo. He’s a Laker now. Give him the time he needs to develop his game. If LaVar wants the type of brand loyalty and longevity for the Big Baller brand that Michael Jordan, Lebron James and Kobe Bryant have enjoyed with their brands, he’s got to step out of the limelight so his sons can step into it. Let their play create the headlines Mr. Ball, not your antics or President Trump’s tweets.