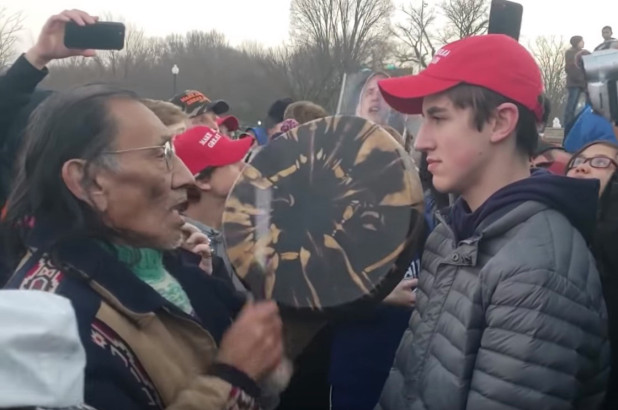 What do you call a group of white high school kids bullied by black adult racists and a Native American activist who lied about being victimized by that same group of white kids for attention? The end of systemic racism in America.

It’s been just over a week since the mainstream media demonized the Covington Catholic High students for wearing MAGA hats after they attended the March for Life, an anti-abortion rally held on the National Mall. The students were accosted by a group of Black Hebrew Israelites yelling racial and anti-gay slurs at them while they waited for their bus. Then, Native American activist, Nathan Phillips, decided to join in on the bullying by banging his drum directly into the face of one of the students. Phillips later lied on national television by claiming that he was the victim of intimidation and mockery at the hands of the students rather than the antagonist of the incident, as subsequent video revealed. Nick Sandmann, the Covington student at the center of the controversy has since hired libel attorney, L. Lin Wood to sue news publications that knowingly misrepresented the story and defamed his name.

Although last week marked a new low in mainstream media (MSM) standards, there are several hopeful takeaways from this otherwise abuse of power by news outlets.

First, it’s blatantly clear that racism is such a non-factor in most of America today that left-wing media felt the need to manufacture a crisis between the Covington Catholic students and Nathan Phillips in order to advance the false narrative that all whites, even kids, are inherently racist. We now know that it was Nick Sandmann who was attempting to diffuse the confrontation and listen to Nathan Phillips despite being taunted by him. In other words, it was Sandmann that was showing respect to an elderly man of color. This is good news.

Secondly, by engaging the Covington students for the sole purposes of intimidating and mocking them, Nathan Phillips proved that victimhood in America is a choice. He chose to be a victim that day because that’s where he finds his purpose in life. He wants people to feel sorry for him. The good news is unlike Phillips, we can choose to walk away from victimhood and into our destiny with all of the opportunities America affords minorities today.

Thirdly, the left’s argument that blacks can’t be racist was disproven the moment the Black Hebrew Israelites entered the picture. This explains why the MSM gave them a black privilege pass by leaving them out of their reporting altogether. Conservatives now have a face to point to that isn’t that of a white male when dealing with racism in America. This is a positive thing. If race-relations are going to improve in America, both sides must acknowledge racism is a heart issue, not a Caucasian issue. We can thank the Black Hebrew Israelites for that revelation. If racism dies in America, so does the democratic party. Therefore, they’re motivated to keep hate alive. We mustn’t allow that to happen.

The Covington Catholic High students did Americans a solid! Although they were bullied, defamed and slandered due to their skin color and values, it wasn’t for naught. In an instant they proved what conservatives have been arguing for decades, racism in America is in rapid decline and it’s no longer an impediment to minority success.