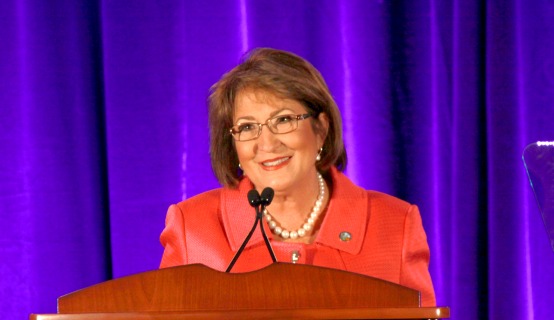 Generally speaking, conservatives learn their lessons from tragedies like the mass shooting in Parkland, Florida, while leftists figure out how to exploit them.

For the second time, the “Republican” mayor of Orange County, Florida, Teresa Jacobs, is sticking her finger in the air to see which way the political winds are blowing on gun issues after the Parkland shooting. Due to term limits, the mayor has turned her attention to running for Orange County’s school board chairwoman. In hopes of winning the seat, the mayor has thrown law-abiding gun owners under the bus to appease Orlando’s left-wing anti-gun lobby.

As I mentioned above, this isn’t the first time Teresa Jacobs has changed her convictions overnight to appease the left. After the terrorist attack at the Pulse Night Club, the mayor bought into the narrative that Omar Mateen was out to hunt for gays. What did she do to garner favor from Democrats? She went from being pro-traditional marriage to pro-gay marriage in the blink of an eye. To this day, and despite evidence, she and many other local officials refuse to publicly acknowledge the fact that Mateen was an Islamic-influenced terrorist that was looking for victims in a gun-free zone where he could inflict the most casualties. Sadly, 49 Americans were helplessly slaughtered at Pulse after a Google search. We know now, that Mateen originally wanted to shoot up Disney Springs but decided not to after he realized there was too much armed security around to stop him.

This time, in her quest for power the former small government, pro-gun, pro-traditional marriage mayor is targeting law-abiding gun owners with a newly implemented ordinance she proposed after the mass shooting at Marjory Stoneman Douglas High School.

Last Tuesday Orange County commissioners unanimously reimposed a three-day waiting period for purchase of firearms at gun shows and flea markets. The commissioners and RINO (Republican in name only) Mayor Jacobs, believe, or at least claim, that reimplementing the waiting period will magically block gun sales to felons and other criminals. Furthermore, Andrea Halperin of Moms Demand Action for Gun Sense in America argues, “This ordinance is a good idea because we believe it can help save lives; that’s the bottom line. Anytime you prevent somebody who shouldn’t have a gun from getting a gun – whether it’s one person or 20 people – that’s a good thing for the safety of the citizens of Florida.”

However, as Barney Bishop of the Sunshine State News reported, there are several problems with this “silly idea”:

First off, Code Enforcement Officers (CEOs) can’t do the work of law-enforcement officers. CEOs don’t have the power to arrest, the authority to ask questions or demand people answer them.

Secondly, they have no authority to confiscate guns, nor are they trained to do so.

Thirdly, “All of this is being proposed to do what? Catch people illegally buying guns?” Doesn’t make sense, does it?

Also, there’s no “evidence that anyone who is not supposed to buy a gun at a show is actually doing so.”

Let me be blunt. There is no “gun-show loophole”! Since buyers and sellers are subjected to the same laws they would be when purchasing their gun at a store, criminals aren’t going to a gun show to buy their guns legally, let alone wait three days if they want to rob someone today. Nor do they want to risk being recognized by law-abiding citizens selling guns at the gun shows. This is nothing more than a feel-good ordinance designed to alienate legal gun owners while undermining our Second Amendment rights.

Ultimately, this ordinance will do nothing but empower criminals in Orange County, Florida, and weaken the rights of legal gun owners. Who would’ve thought we would have “Republican” Mayor Teresa Jacobs to blame for weakening the Bill of Rights?