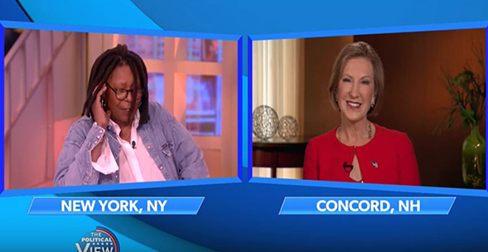 As Carly Fiorina prepares to enter the lion’s den with her appearance on “The View” this Friday, I hope she’s aware that the hosts of the show are apparently “self-identifying” as liberal male chauvinists. What else would cause a fellow human-being to degrade a woman based upon her physical attributes, while totally ignoring her accomplishments and capabilities?

Let’s be honest, Carly Fiorina is far more attractive than Hillary Clinton could dream to be and she certainly doesn’t look “demented.” I’m certain the hosts of “The View” will not comment on Hillary’s looks any time soon- at least not before Election day November 2016. Therefore, the question becomes what caused this aberration from the lefts “I am woman hear me roar” mantra? I suspect there are a few reasons. Here they are:

1) Fear. A competent conservative woman undermines the lefts narrative that women with conservative values serve their families barefoot and pregnant at the kitchen table; They don’t serve as CEO’s of Hewlett Packard like Carly did.

2) Leftism is self-contradictory. With the exception of the activists in their party, you’d be hard pressed to find any democrats that practice what they preach behind the closed doors of their home. I’m certain Barack Obama doesn’t want his daughters in a bathroom with men who “identify” as women (aka perverts). Likewise, I’m doubtful that Tom Steyr and George Soros go out of their way to pay taxes, and divvy up their wealth amongst their homies in the hood.

3) Thirdly, leftists need a villain in order to feel good about themselves. This is why they create “fake moral causes” like man-made global warming, or saving the whales at Sea World from the people that saved them, and even championing a mental disorder like “gender-dysphoria,” while lashing out at those of us that realize a man that wants to be a woman is not normal.

Could you imagine the exodus that might occur by women of the left from the Democratic party were Carly Fiorina to become president? Based on their apparent juvenile IQ’s (you can only be nice for so long), I’m doubtful the women of “The View” can. The idea that you could break the “glass ceiling” as a woman that holds traditional values, flies in the face of everything their leftists professors on college campuses, SNL and MTV taught them.

Furthermore, it is the height of hyprocrisy to stand for so-called “women’s rights” while attacking Carly’s appearance. As they’d argue, “aren’t we passed the caveman era?” In an attempt to render men an unnecessary species, leftists feminists have begun behaving like the male chauvinists of the good ole days.

Lastly, does anyone really believe the hosts of “The View” could offer a philosophical view of their ideology? Of course not! The democrat’s voter base are motivated by emotion not common sense. They vilify conservatives like Carly Fiorina because they have no effective arguments to the contrary. Democrats don’t win by making their constituents successful; they win by keeping them mad and dependent upon the federal government.

I’d imagine the male chauvinists of “The View” are salivating to rip Carly to shreds, or rip her clothes off depending on which sex they identify as at the time of the taping. I’m confident however, that Carly’s substance will carry the day.