The Carl Jackson Show and Blog
Home The Blog Political A free country or free crap? 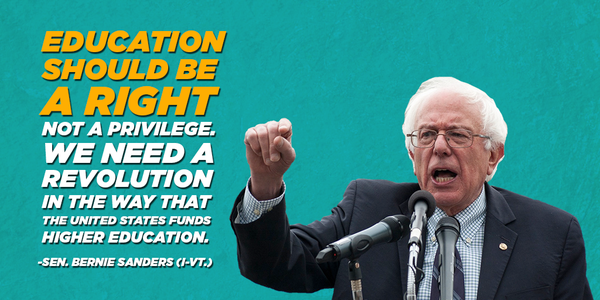 If Obama’s economy is so great, why are kids concerned that they won’t be able to pay back their student loans? Is it just greed?

I’m beginning to wonder why so many of Sen. Bernie Sanders’ younger supporters even bother with college. Don’t they understand they could potentially become a “1 percenter” in this rigged economy? Don’t they understand that aspirations of higher earnings and a secure future are morally unacceptable? Who forced them to go to college and take on loans to improve their plight in life anyway? Whomever it was that motivated them to succeed should be flogged! Hasn’t anyone told them that their 401k plans might be handled by the greedy scumbags at the big banks? Sounds crazy, right? This is what you must believe to support the real Democratic front-runner, Bernie Sanders.

When you stop and think about it, socialism is the only government-run lottery system that makes you poorer when you win.

So what’s Sen. Bernie’s appeal? How did a 74-year-old white Jewish male, who looked frail and sickly in the latest Democratic debate, garner so many votes in Iowa and New Hampshire, particularly with college-aged voters? I contend it’s because he’s both genuine, and he probably looks and sounds like left-wing professors all across America that kids are accustomed to. He’s existed in Washington’s bubble, just as university students live in their socialist utopian bubbles we call college campuses.

As media outlets and the workforce become increasingly flooded with liberals, it’s more likely than not that America as we knew her will never be the same. I don’t mean to sound like an alarmist. I don’t believe America will fall off the face of the earth; however, if we don’t put a constitutionalist in the White House, the gap between what America once was and what it’s become will be too wide to close.

Therefore, the question becomes: How do you beat Santa Claus, as Rush Limbaugh puts it? How do you convince two generations of Americans that have not been taught why America is so exceptional that free money isn’t as prosperous as a free society? For conservatives like myself, your initial answer may be “economics 101.” Wrong! The answer is morality. That beautiful “M” word we like to avoid because we mistakenly believe we won’t get independents to vote for our guy.

I hoped Hillary Clinton would be brave enough to tell the audience at the Wisconsin debate Thursday that Bernie was lying to them; or at the very least, extremely naive. I know, that sounds dumb on my part, but a brotha’ can hope, can’t I? Listen, giving students “free” college tuition is akin to stealing their credit card out of their back pockets to buy them Christmas presents, receiving accolades from your victim, then waiting for their bill to come in the mail, with interest, while you skip town. To put it succinctly, free college is theft.

I never think about the money I’ve earned without considering the time and energy it took me to make that money. Why is it morally acceptable for anyone to spend half of his work life funding corrupt politicians in D.C.? Why does anyone have a right to my time, my life? They don’t! Why is it OK for money-hungry Democrats to say “you work, I eat”? It’s not! Someone needs to really stand up for college students by saying it’s stupid to go into debt for something you can’t afford. Rich people get rich when they learn that lesson early.

God has generously dispensed talents amongst all of us. Some of us will make more money than others. Personally, I’m working hard to become an evil “1 percenter,” but I’m a long way off. No matter. I’ll keep trudging along because it’s the fight as well as the struggle that challenges me, and it’s the thought of providing for my family and my elderly dad that motivates me. To top it off, I like to believe I’m pleasing God by using my talents.

Grow up, Americans! There are corrupt people in every facet of industry! Do business elsewhere! There are crony socialists in D.C. that count on large donations from bankers, corporations, etc. Take your vote elsewhere! You don’t fundamentally transform the greatest nation to ever exist because your butt is too lazy to do a few minutes worth of research.