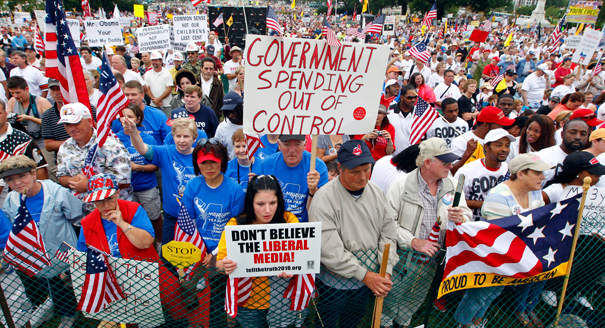 If the left can get you to deny the relevance of God in public policy, they’ve won. There’s a reason our Declaration of Independence does not read “… endowed by our government with certain unalienable rights.” What the government giveth the government can taketh away. God was central to our founding, but the tea party seemed to forget that. They themselves had become politically correct.

“Don’t Tread on Me” became more than a flag and mantra for the tea party when Donald Trump defeated Hillary Clinton on Nov 8. It finally became reality for a movement that lost its way. The movement that gave rise to historical victories for Republicans in the 2010 and 2014 midterm elections centered its message on fiscal policy and liberty to the exclusion of social and cultural issues. In doing so, its adherents left behind their greatest ally in the war against leftism – evangelical Christians.

It’s true that President-elect Trump won white working class men and women in greater numbers and slightly improved black and Latino turnout over Mitt Romney in his 2012 bid for the White House. However, it is also true that Christians across the nation that grew increasingly frustrated and fearful of the existential threat that loomed over the horizon due to the mockery, intolerance and religious bigotry aimed predominantly at them by our media and entertainment elites, learning institutions, the LGBT community, politicians and judges turned out in droves for Donald Trump to push back against the very institutions that threatened our First Amendment right to freely practice the religion of our choice both inside and outside of church walls. Christians aren’t expecting Trump to be a champion for their principles, though it would be nice. We do expect him to be an advocate for the Constitution, particularly as it pertains to the Bill of Rights and equal protection under the law.

The tea party had to learn the hard way that liberty at the exclusion of God isn’t liberty at all. Without Him, by default or design, the only other moral authority in any nation is its government. Government’s ever-expanding influence on the culture, religious institutions and everyday life undermines the need for God – and, eventually, the reality of His very existence. Unfortunately, besides a quick prayer before some rallies, I observed the troubling trend of removing God out of our politics within the tea party as well.

As a matter of fact, it wasn’t long after I attended local tea party rallies that I began hearing things like “let’s drop the social issues and stick to fiscal policy.” Uh oh! You’d never hear Democrats saying something so silly! Democrats run toward “social issues” because they understand they’re the gateway into minority communities as well as the LGBT community. On a deeper level, as I mentioned earlier, they understand that left-wing social issues undermine God. Therefore, we conservatives run away from social issues at our own peril.

You must understand that the left’s animosity for conservative positions on social issues extends far beyond abortion. In their mind’s, the simplest terms such as “pro-life” and “religious liberty” are synonymous with “discrimination.” Yet, their anger causes them to excuse their own bigotry and intolerance toward anyone that doesn’t share their worldview – like the tea party. Unfortunately, like many of the RINOs that exist in Washington, the tea party found itself on defense before developing a lasting infrastructure. They were willing to abandon God for political expediency.

Here’s the takeaway for the GOP, conservatives and tea partiers alike that will be advantageous for future victories at the ballot box: As long as there is a moral God in heaven (forever) there can be no moral equivalence between one’s sexual preference and skin color, abortion and adoption, welfare and work, financial generosity and coercion, or rule of law and blatant disregard for law, just to name a few. It was the threat of having God removed from the GOP platform that helped motivate evangelicals to vote in mass for Donald Trump, and it will be in part an unapologetic defense of religious liberty that will bring evangelicals back to the polls in 2018. Hopefully, the tea party won’t forget that again.