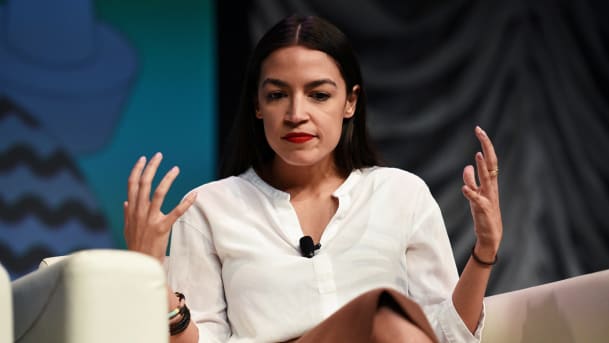 If America is “garbage” like Alexandria Ocasio-Cortez claims, shouldn’t she support building a wall on our Southern border to spare the rest of the world from American misery?

That’s right, this past weekend the socialist Rep. Alexandria Ocasio-Cortez, D-N.Y., implied that the late President Ronald Reagan was a racist who pitted white working-class Americans against minorities in order “to screw over all working-class Americans.” She also said that America, as it exists today is basically garbage. What the self-proclaimed democratic socialist doesn’t understand is that not pandering to black victimhood isn’t a sign of racism; it’s a sign of respect.

Secondly, Cortez’s recent rise from bartender to one of the most influential members in all of Congress is a story that epitomizes American Exceptionalism, not garbage.

Cortez was speaking at the South by Southwest Conference in Austin, Texas, when she bashed Reaganomics as a method used by the former president to pit Americans against each other. She also claimed his use of the term “welfare queens” in the ’80s was code for black women who were sucking off the teet of government. (I’m paraphrasing.)

Ironically, it’s socialists like Ocasio-Cortez who pit Americans of all stripes against one another in order to gain power, fame and fortune for themselves. They divide us on issues of wealth and economics, health care, race, gender, sexual preference, or whatever new issue may pop up that they’ll use to convince more voters that big government is the solution to life’s problems.

Fundamentally speaking, conservatives want voters to be productive citizens, utilizing their God-given strengths. This allows Americans to dream, achieve and feel better about themselves. Whereas leftists like Ocasio-Cortez want Americans dependent upon the government, so they can pat themselves on the back for doling out government crumbs.

In a 2004 column in NewsMax entitled “Blacks Prospered Under Reagan,” the writer encouraged Republicans to follow Reagan’s lead and not get suckered into “racial politics.” Instead, like Reagan they “should always speak to every American, regardless of race, about opportunities and productivity.” Ronald Reagan spoke of one’s destiny, not their dependence. The columnist noted that Reagan believed that there was no “black America,” or “white America,” or “Hispanic America” – “there is only “productive” and “unproductive” America.

Nationally syndicated radio host and author Larry Elder was also quoted in that same column at the time. Elder noted that under Reagan black unemployment in the U.S. went from 14 percent in 1981 when he took office and declined to 11.6 percent when he left. On top of that, the median income for black households rose 84 percent between 1980 to 1990 according to Census data. Median income for white households increased by 68 percent during that same time period.

As usual, Ocasio-Cortez is clueless when it comes to American Exceptionalism and Reaganomics. Scores of blacks and minorities thrived under Reagan just as they are currently under President Trump’s leadership. Sadly, Cortez wouldn’t know what American greatness looked like if it jumped up and bit her in the butt. She could rise from the status of a bartender to a congresswoman, or something crazy, miraculous and unimaginable like that, and she still wouldn’t see it – oh, my bad, that’s already happened.