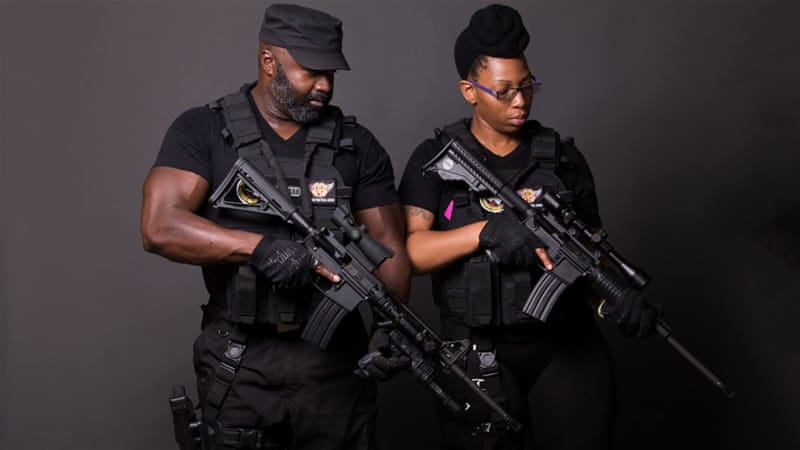 Given America’s history with slavery, black people should be the biggest advocates for the Second Amendment. Guns equal freedom!

Despite the mantra from the left, there’s no such thing as an “assault rifle.” It’s a term they invented to make guns sound scary, and it works. I prefer to call semi-automatic rifles, such as the AR-15 by their proper names: “anti-dictator rifles,” “self-defense rifles” and sporting rifles. They’re available for purchase to all law-abiding citizens of age, as they should be.  Blacks should be skeptical of any smooth-talking politician that claims he or she wants to keep us “safe” by confiscating guns or banning so-called “assault weapons.” Guns have the last say in determining a free society from an enslaved one. That’s why the Second Amendment is so important.

Democrats have been selling gun control in the black community as long as I can remember. They play on our fears because they want to control us.

No one wants to see senseless murders committed by thugs with guns. But we can’t allow democrats to blur the line between criminals that commit violent gun crimes and law-abiding gun owners that simply want to defend their lives and property from tyrants and criminals.

Democrats and their allies in the media often ignore the high gun crime rates that exist in their own Blue cities like Chicago, Los Angeles and Baltimore, despite having the strictest gun control laws in the country. Furthermore, they rarely mention that the overwhelming amount of violent gun crimes are suicide, drug and gang related. Mass shootings are a big problem, but they’re a tiny percentage of annual gun crimes. Also, as we learned with the Parkland shooter, plenty of warning signs were ignored. Therefore, we can deduce that mass shootings are preventable when people speak up, and existing laws are enforced. By sensationalizing these tragedies, democrats have convinced too many blacks that guns are evil instead of the criminals that use them for ill purposes.

Remember, cops can’t be everywhere. We can’t rely on them to protect us from bad guys. In most cases, cops are called only after a crime has been committed or is in progress. That’s too late! Rarely do they prevent crimes.

Blacks must be vigilant protecting our Second Amendment right. It’s easy to grow complacent post-slavery, but we must always keep the big picture in mind – freedom!

Here are 3 reasons why blacks should always oppose any form of gun control:

First, during the Reconstruction era it was white southern democrats that made a mockery of the Thirteenth Amendment that ended slavery by implementing so-called “black codes.” The codes made it illegal for former slaves (freedmen) to own guns, read and much more.

According to the book titled “The American Promise,” in Mississippi insulting language or gestures from blacks was illegal. Across the south, black codes barred freedmen from jury duty and denied them the right to vote no matter how educated, intellectual or wealthy they were. “At the core of the black codes, however, lay the matter of labor. Faced with the death of slavery, legislators sought to hustle freedmen back to the plantations.” Under so-called “apprenticeship laws” black children could be taken away from parents who were deemed unfit by judges and bound to work for planter “guardians.” Freedmen couldn’t work outside of an occupation that required hard labor or domestic service without paying an annual tax. A tax they couldn’t afford. Imagine how much quicker blacks would’ve secured their rightful place in American society had we been allowed to own guns.

Secondly, contrary to popular belief, far more guns are used in America to prevent crimes and defend life, than are used in violent crimes. According to a column in Forbes titled “That Time The CDC Asked About Defensive Gun Uses,” people in the U.S. use their guns to save lives as much as 3,000,000 times per year, or every 13 seconds. Mainstream media doesn’t report this because it doesn’t fit their narrative that guns are bad, and they’re only used to harm people. Instead, they purposely exploit gun violence in hopes that you’ll be shamed into giving up your guns and forfeiting your right to bear arms altogether.

Thirdly, gun control doesn’t work for two reasons: 1) criminals don’t obey laws, and 2) According to John Lott, president of the Crime Prevention Research Center, and author of the book the “War on Guns,” a major source for illegal guns in America are drug dealers.

Having grown up in some tougher neighborhoods of Los Angeles, I can attest to this. I had a friend loan me a gun as early as 10 years of age. In grade school, local politicians and academics would show up at our assemblies and rail against guns, but they didn’t have to worry about gangs or watch their backs walking home from school, so we didn’t listen. Illegal guns are the norm in the ‘hood. Sadly, what wasn’t normal were talks about the preservation of the Second Amendment and the importance of safe and legal gun ownership.

Guns are the most efficient tools ever created for saving lives and preserving liberty. Our ancestors were denied their Second Amendment right. As a result, they endured slavery and torture beyond our comprehension. I can think of nothing that dishonors their memory more than being dumb enough to voluntarily disarm.