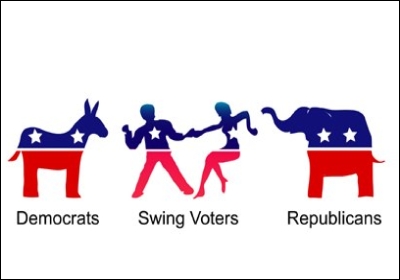 With two extremely unfavorable presidential candidates at the top of the Republican and Democratic tickets, and polling showing the race is in a virtual dead heat, barring a monumental “October surprise,” the debates will determine our next president.

Donald Trump has momentum on his side, and Hillary Clinton has most of mainstream media on hers. Ultimately, the current “undecided” voters will have the last say. But what will they be looking for? I often say good politicians are visionaries not reactionaries. This couldn’t be more true in political debates. Style, substance and competence will win the day. Although most viewers may not be able to pinpoint exactly what they’re hoping to see, their gut will instinctively inform them.

It’s no secret Hillary will depend on her vast knowledge of foreign and domestic policy, hoping to make Trump look incompetent on the big stage, and Trump will try to endear the audience with a style of debate that’s uniquely his own. However, if either of the candidates focuses too heavily on his or her strongest attribute to the neglect of the others, it could mean disaster for the respective campaign.

For many, Donald Trump is a breath of fresh air. He’s uncalculated and often unscripted. His ability to connect with his base, despite the fact that he’s a billionaire, is uncanny. He can be agile and command the stage like no one’s business. He tells you what he thinks, good or bad, with no ambiguity – you know where he stands. His style helped him coast through the primary, but the general election and the presidential debates are an entirely different beast altogether. Political nerds like myself pay close attention to the primaries, but the average American is just beginning to pay attention to politics. This can be an advantage or disadvantage for both candidates as new viewers come to the debates with preconceived notions. If Trump is unable to complement his style with substance and a show of competence, he’ll lose.

Now let’s examine Hillary Clinton. She’s a known quantity that’s not well-liked even within her own party. Despite the revelations of Benghazi, her email and pay-to-play scandals, secretary Clinton does bring a sense of credibility and substance to domestic and foreign policy. Personally, I believe she’s shown she’s incompetent and feckless, but her supporters believe otherwise. They believe her experience is a better gamble than Trump’s “outsider” persona. If she can manage to somehow become “likeable” in the debates, combining style with her command of the issues, undecideds will likely vote for her as the safe bet. However, this is easier said than done. Hillary has openly admitted that she’s a better process candidate than a “showman,” hoping to lower expectations for herself on the “enthusiasm meter,” while framing Trump as nothing more than a reality television star. I’m not sure that’ll work this year. It’s extremely difficult for any one political party to retain the White House after their party has occupied the presidency for eight years, even if the opponent is Donald Trump.

Both Hillary and Trump have 100 percent name recognition. Therefore, it’s imperative that both candidates positively surprise their viewing audiences. Hillary struggles with authenticity, and Mr. Trump with a fundamental knowledge of policy. Whoever impresses new viewers most, wins – and I have a feeling we’ll all be watching.