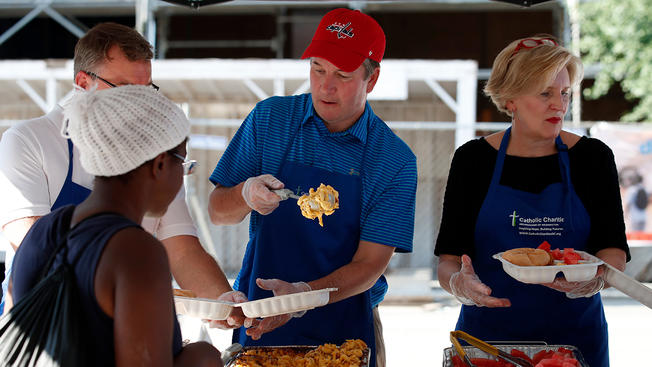 The only crimes Brett Kavanaugh is guilty of is being a white male who is religious, conservative and pro-life. The left couldn’t careless whether he’s guilty or not of the crime alleged by Christine Blasey Ford and his latest accuser, Deborah Ramirez. All they care about is keeping him off of the Supreme Court by any means necessary. Damn his reputation, family and career.

The left isn’t concerned about true justice; they have a larger goal in mind – social justice, also known as collective justice, which is no justice at all. True justice requires equality before the law – blind justice based on evidence not accusations, regardless of one’s race, sex, faith or socio-economic status. In America, we are presumed innocent until proven guilty in a court of law. Under social justice, however, if you belong to a certain race of people or belief system, you can be found guilty in the court of public opinion before you ever get your day in court. Such is the case with Brett Kavanaugh.

In other words, his whiteness, sex and conservatism are his crimes. That’s why feminists are already branding him guilty as charged; he can’t possibly be innocent of the crimes the white man has perpetrated on humanity, even if he’s innocent of the smear campaign he’s undergoing. According to the dictates of social justice, Kavanaugh is an oppressor of minorities and must pay the price.

Twenty years ago, I was the victim of a violent armed robbery. Additionally, I have family members and friends that have been victims of actual sexual assault, not groping or so-called “attempted sexual assault.” I find it hard to believe that Christine Blasey Ford and Deborah Ramirez had such gaps in their memories that they required psychological help to draw them out. Both myself and the victims I know can still explain the crimes perpetrated upon us with great specificity.

Although I understand that each criminal case is different, it’s obvious that Ford was motivated politically. When you’re willing to contact the left-leaning Washington Post and a Democratic politician, before you’ve contacted the police, you’re politicizing your attack. So far, every witness Ford has said attended the party where the attempted assault allegedly happened has denied being there. Brett Kavanaugh himself, Mark Judge (supposedly the second guy in the room), Patrick Smyth and the latest being Ford’s “lifelong friend” according to the New York Post, Leland Ingham Keyser – none of them recalls such a party ever taking place.

Additionally, we can’t look past the far left-wing groups and agitators that are behind the smear campaign against Brett Kavanaugh. Both Ford and her attorney, Deborah Katz, are radical feminist activists. Additionally, Paul Sperry of the New York Post revealed that “Hillary Clinton’s former campaign press secretary Brian Fallon hired one of [Sen. Dianne] Feinstein’s top aides on the Judiciary Committee to help tank President Trump’s Supreme Court picks from the outside. Together, he and Feinstein’s aide – former deputy general counsel Paige Herwig – launched a liberal nonprofit group called Demand Justice to lead the left’s attack on GOP nominees.” The group “Demand Justice” is funded by American hater George Soros.

Not to mention Ford and Feinstein’s convenient timing. First, Ford waits about 30 years to ever report the crime to her therapist; she waits another six years to report the incident to the Washington Post and her congresswoman. Then, Sen. Feinstein withheld the letter until the week of Kavanaugh’s confirmation vote. Democrats who say that Ford shouldn’t be “rushed” to testify are illogical. Any crime victim knows the sooner you report a crime the more likely it is cops can solve it. Also, justice delayed is justice denied for victims and their families. A better question for Christine Blasey Ford and Democrats is: Why do they want to delay Ford’s justice if they believe her story is credible?

Lastly, the FBI has no jurisdiction over a 36-year-old local crime. Ford, doesn’t deserve special treatment under the law for an uncorroborated attack. Sadly, Senate Judiciary Committee Chairman Chuck Grassley has done a grave disservice to the Senate by allowing this spectacle to continue for so long.

Leftists don’t care if there’s evidence to clear Judge Kavanaugh of the allegations made against him. They care about punishing a white, conservative, pro-life, Catholic male they believe could potentially overturn Roe v. Wade. In other words, Kavanaugh is the scapegoat for all pro-life white men. That’s social justice.