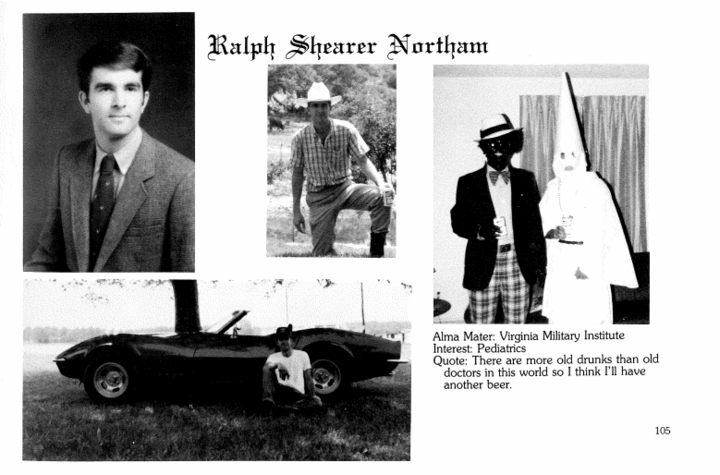 may surprise you. I don’t believe that Gov. Ralph Northam should resign. However, given the support he’s lost with his colleagues in the Virginia Legislative Black Caucus, as well as many others in the state House and Senate, it’s hard to imagine he’ll survive.

Having said that, why are Democrats acting so surprised that one of their own, Northam, would be photographed in black-face or Ku Klux Klan garb? Is it any surprise that a man who would condone post-birth 187s on innocent babies might be a racist too? The truth is the Democratic Party isn’t surprised by the recent revelations of the governor’s bigotry any more than they were surprised that he’d advocate for infanticide. They’re just mad he got caught. Face it: Racism and eugenics are part of the Democrats’ DNA.

There’s been mounting pressure for Northam to resign since the black-face photo emerged Friday. He did himself no favors over the weekend by first admitting he was in the photograph, then denying a day later that it was him in the photo. One of those calling for his resignation is Planned Parenthood, the nation’s largest abortion provider. Keep in mind that these titans of virtue had no problem with Northam when he disturbingly explained the process of a post-birth abortion earlier last week. Northam laid out a scenario where the baby would be made comfortable in a separate room while mom and Dr. Sicko discuss whether or not to execute the child. Planned Parenthood fears the national backlash it could receive if more Americans begin to research their founder, Margaret Sanger. Sanger was a racist and a eugenicist that wanted to eliminate “undesirables” from the face of the earth. She considered blacks undesirables.

The timing of Northam’s photo also poses a problem for the left. The photo was apparently taken in 1984. This blows a hole in the myth known as the “Big Switch.” Supposedly, the Democratic Party that founded the Ku Klux Klan as a way of terrorizing black and white Republicans during Reconstruction, and implemented Jim Crow laws in the South, magically stopped being racist overnight. That’s supposedly when the Republican Party took its place. However, that can’t be true since only one of 21 Dixiecrat senators left the Democratic Party, and just one House member as well. The remaining Dixiecrats never left the Democratic Party. Additionally, the GOP did not take over the House of Representatives until the “Gingrich Revolution” (named after former Speaker of the House Newt Gingrich) in 1994.

To be clear, none of us knows what’s in Gov. Northam’s heart, but the combination of advocating for infanticide and being outed over a racially insensitive photo in the span of one week may cause voters to investigate their Democratic heritage. The left is going crazy not for fear that there’s a “racist” in their midst; they fear they’ll be exposed.

Sadly, for Northam, he picked a party that isn’t big on forgiveness and repentance. The fact that he could be dragged through the mud for something he did decades ago should concern us all. There’s no telling when any of our pasts could come back to haunt us. Northam may not have ever been a racist as far as we know, but his party will never give him the benefit of the doubt, particularly since they use identity politics to advance their radical agenda. As far as they’re concerned, he’s a casualty of war. I hope Gov. Northam learns a powerful lesson: When you live by the left’s rules, don’t be surprised when you die by them.