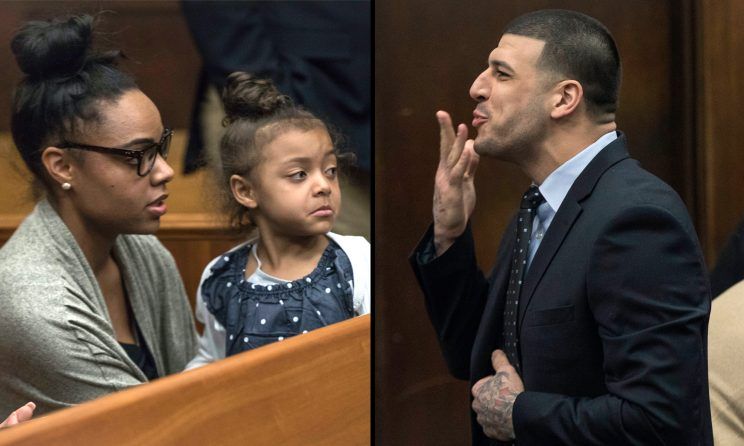 When considering God’s eternal judgment, is it still politically incorrect to say I feel sorry for Steve Stephens and Aaron Hernandez? Is it too soon?

It’s hard to fathom, but God would have forgiven Steve Stephens, also known as the “Facebook killer,” had he repented of shooting 74-year-old Robert Godwin Sr. in cold blood. The same could be said for shamed ex-NFL star and New England Patriots tight end Aaron Hernandez who hanged himself in a Massachusetts prison earlier this week. Hernandez was convicted of murdering his short-time acquaintance Odin Lloyd in 2013. However, a week ago he was acquitted for a 2012 double-murder case. Hernandez left the courtroom in tears as he blew a kiss to his 4-year-old daughter and mouthed “I love you” to his high-school sweetheart and fiancée, Shayanna Jenkins- Hernandez (yes, she legally changed her name despite not being married). For the first time in years, Hernandez appeared human, if even for a brief moment.

I’ll never fully comprehend what could cause men like Aaron Hernandez – who at least on the outside looking in, appear to have obtained extraordinary fame, success and happiness – to commit such acts of evil. Or, in the case of Steve Stephens, who had a career as a caseworker and was by no means a thug, to shoot and kill an innocent passerby at random. Stephens in his own right was successful and someone the black community could look up to.

Fox News interviewed Stephens’ mom, Maggie Green. According to her, Stephens visited her home before the murder. He told her, “Momma, this will be the last time you see me. … I just wanted to see you for the last time.” She believed that he might commit suicide but didn’t think he was capable of murder. Furthermore, she claimed he was a good Christian man who just snapped. Apparently, Stephens had a major gambling issue. Additionally, earlier media reports speculated that it was a break-up with his girlfriend that caused Stephens to snap. Given the fact that Stephens demanded Mr. Godwin say her name before he shot him lends credibility to that claim.

I suspect my initial reaction upon hearing what Steve Stephens had done to Mr. Godwin was much like your own – I wanted him caught dead or alive. Bring back the era of the Wild West, horses and all! To top it all off, I wanted Black Lives Matter to round up the posse and finally do something productive.

On my own radio show Monday evening, I blasted Steve Stephens as the evil murderer he was. I thought he should be shot and killed on sight, whether by cops or citizens. My feelings haven’t changed much since that show aired, but my perspective shifted slightly as I considered my own life before Christ intervened.

We’re very quick to call people like Steve Stephens or Aaron Hernandez “monsters,” because frankly we don’t want to believe that “normal” people like ourselves are capable of committing such violent crimes. We presuppose there must be something inherently wrong with the perpetrator. Right?

The truth of the matter is they’re not an enigma. They’re no different than you or me. They allowed evil thoughts in their minds to linger and manifest because at some point they stopped considering God. It’s really that simple.

Recently, I began considering fallen public heroes that have disappointed me because they’re not what they claimed to be. Some pastors came to mind. Bill Cosby, who had been a hero of mine, also came to mind. Even Bill O’Reilly, whom I believe may be getting an unfair shake with his Fox News departure, came to mind.

This caused me to ask myself: At what point does a person’s bad behavior nullify all the good he has done throughout his lifetime or vice-versa? Whether a person commits adultery or an atrocity that harms an individual, group, or society, what has to occur for that person to be considered redeemable, or even, forgivable? What’s the proper balance of grace and justice?

I’m afraid our litmus tests are often higher than God’s. I’m not saying justice shouldn’t be served. It should. In my opinion, Hernandez and Stephens should have received the death penalty. However, even if they had, God allows for repentance and grants forgiveness even among the worst of the worst in society.

Because of the sacrificial blood offering of Jesus Christ, those of us who accept and believe that Jesus Christ died and rose from the grave are made new, clean and whole. His good behavior nullifies our bad behavior (no matter how bad) – past, future and present.

As Christ followers, we’re to develop an eternal perspective on all facets of life. It isn’t easy, but necessary, if we’re going to be effective witnesses for Christ. I guess the lesson here is, before we seek justice from the Steve Stephenses and Aaron Hernandezes of the world, we should take time to thank Jesus for taking our punishment and serving our sentence. Just a little post-Easter perspective.