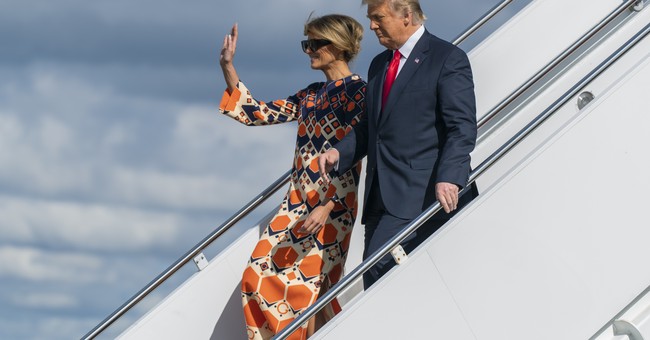 Source: AP Photo/Manuel Balce Ceneta
Don’t let the Democrats or the Republicans in Washington, D.C. fool you. They don’t hate former President Donald Trump, they fear him. Sure, his tweets and his style were annoying and even detrimental to his agenda at times, but make no mistake about it, the Washington establishment loathes Donald Trump because he was an effective politician. He was effective for two reasons: one, his business background trained him to be a decisive leader. Two, as a former entertainer, he understood better than most Republicans that politics is also a game of political theater. Unfortunately, it is the theater that bested him in the end.

Likewise, former First Lady Melania Trump, threatened the political establishment, but particularly the left. She was more than just a supermodel. As a multilingual, legal immigrant that loves America, believes in the American Dream, and respects our traditional values, she posed a unique threat to the left – she was culturally relevant. Don’t underestimate this! I love me some Nancy Reagan, Barbara Bush, and Laura Bush, but they were never going to make serious inroads in pop culture. Melania Trump would have. To this day, Democrats want you to believe that Michelle Obama and Kamala Harris deserve to be on the cover of fashion magazines, but not Melania Trump the supermodel? Give me a break! If you believe as I do that politics flows downstream from culture, then you understand that Democrats had to destroy Melania Trump’s image because she threatened their turf – culture.

The left fears Donald Trump because for the first time since the late President Ronald Reagan, there was a Republican in the White House that posed a serious threat to their plan to fundamentally transform America into a post-constitutional society. Democrats have been used to go-along-to-get-along Republicans for three decades. Imagine the left’s chagrin when an overly tanned billionaire from New York decided that he would run for the presidency of the United States to put the government back into the hands of the people.

The Republican establishment fears Trump for different reasons. One, he didn’t conform to the traditional party mold. He’s not necessarily humble or overtly religious, he could be rude, he’s not a war-hawk, and he was no Rush Limbaugh when it came to communicating public policy positions, although Trump supporters understood what he meant.

Truth be told, Donald Trump governed more conservatively than any Republican in modern history. By being a true maverick in Washington, he frequently exposed the lack of courage and conviction that existed amongst establishment Republicans to implement the ideas they claimed to believe. Ideas such as lower taxes to promote job growth, border security, life, religious freedom, energy independence, a strong military and better educational choices for all Americans regardless of skin color. Establishment Republicans cared more about appeasing elites in the liberal media and their Democratic colleagues across the aisle, than the men and women that elected them to represent them until Trump came along.

Trump used his platform to grow the GOP base instead of wasting time hobnobbing with the elites. Granted, it didn’t always look or sound pretty, but at the end of the day Trump was able to grow the party because the actions he took to “Make America Great Again” outweighed the annoyance from his tweets.

Donald and Melania Trump had no reason to run for the presidency and abandon their lavish lifestyle, but they did…for free! The reason Trump can draw massive crowds at his rallies, even post-presidency, isn’t due to the spectacle of the events, it’s because his supporters believe him when he says he’s fighting for them, because he did. The abuse that the Trump family took, and continues to take, at the hands of the mainstream media, the Democratic Party and establishment Republicans, has been nothing less than disgusting.

There’s still plenty of work to be done to clean up Washington, D.C. There’s way too much spending and far too many politicians that are bought and paid for by corporatists. Obamacare needs to be completely dismantled so that politicians are finally out of the hospital room with doctors and their patients, illegal immigration reform needs to be settled once and for all, the unelected bureaucratic establishment needs to be sent packing so they can’t rule with impunity through excessive regulation. Furthermore, scientists involved in the “sky is falling” man-made global warming hoax that was created to redistribute America’s wealth, line the pockets of corrupt politicians and their friends, and make immoral people feel moral, need to be brought to justice. Additionally, our military growth, including Navy ships, must outpace China’s.

Thank you, President Trump and First Lady Melania for sacrificing your way of life, your fortune and your sacred honor to Make America Great Again!