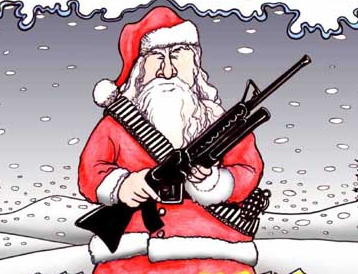 If the media were to accurately report the number of times a gun was used to prevent a violent crime rather than to perpetrate one, they’d have to run more than 8,200 headlines per day.

Truth be told, it’s safer for you to have a gun inside of your home or on your person than not. Burglars and despots alike understand this fundamental truth: “Shotgun blasts are bad for your health!” If you say it like “Ice Cube” use to sing it, it sounds better.

According to CNS News, in January 2015 President Obama signed 23 executive orders – one of which commissioned a $10 million study by the Centers for Disease Control, or CDC. The study was titled, “Priorities for Research to Reduce the Threat of Firearm-Related Violence.” The goal of the White House was to “conduct research on the causes and prevention of gun violence.” The CDC concluded, “Self-defense can be an important crime deterrent.” To which I would say, no crap, Crimlock!

Lest you are inclined to feel vindicated as a conservative, let’s first examine the other conclusions stumbled upon by the CDC, as well as answer why the CDC is conducting firearm studies in the first place. The latter should be of grave concern to any Second Amendment-loving American.

You should know that the CDC also assessed that crime victims who use a gun for self-defense had consistently “lower injury rates” than victims that used other methods for defense. The study indicated that violent crimes, including homicides, had decreased in the last five years. Can you guess why? I attribute the declining numbers to skyrocketing gun sales resulting from President Obama’s genius marketing campaign for gun control. I’ve never seen a better NRA spokesman than President Obama!

Additionally, in 2010 alone, more than 105,000 Americans were either injured or killed by gun violence. What we don’t hear about in the media, however, is that more than 73,505 of those people didn’t die, leaving nearly 32,000 who did. It’s sad when anyone loses their life to violent criminals at the hand of a gun; however, when you consider a U.S. population of approximately 320 million people, you can see why the numbers don’t support gun-control advocates. Only .0001 percent of Americans are affected by gun crime. Sadly, black males in da ‘hood – aka Democrat districts – are disproportionately affected by gun violence. Thirty-two of 100,000 blacks are killed at the hands of a criminal with a gun.

Furthermore, it’s useful to know most gun deaths are due to suicide. In fact, in 2010, suicides accounted for 61 percent of the 335,600 deaths by gun.

Oh yes, and let us not forget about those feel good “gun turn-in programs” held by local law enforcement where someone’s grandma flashes her freshly permed hair out of the driver’s side window of her Toyota Corolla for a televised interview. Inevitably, what you’ll hear is, “It’s so dangerous on these streets nowadays for these young kids; I’m so glad someone is trying to make our community safer. I just want to do my part.” All the while granny is turning in her rusted .357 Magnum of .38 special that has never been and never will be used to stage a heist at 7-Eleven. Surprisingly, the CDC admitted that “gun turn-in programs are ineffective.” Someone needs to tell Granny, since she’s not a criminal, she probably won’t be using her gun to commit a crime. Hence, it is safer to keep it in case you need to aim it at someone who will.

With all of this overwhelming evidence that supports pro-gun advocates like myself, you might ask why we should be concerned about this particular CDC study – particularly, when it seems as though President Obama is losing his argument for gun-control. I wish that were the case! Let’s connect the dots.

The fact that the CDC conducted this study is indicative that President Obama intends to use health-care laws to reign in the Second Amendment. This is why we need a constitutional conservative in the White House who’s willing to completely dismantle Obamacare.

Using large bureaucracies to circumvent the will of the people is the modus operandi of leftists. With suggestions from the CDC, the federal government could potentially use Obamacare to determine who is fit to own a gun – mentally or otherwise.

When you consider that many of the organizations that conducted the CDC study have close ties to President Obama himself, we should be even more alarmed. Left-wing organizations like the California Endowment, which promoted Obamacare; Annie E. Casey Foundation; the Joyce Foundation, where Obama once served as a board member; and Kaiser Permanente, which contributed $500,000 to Obama’s presidential campaign, all participated in the study.

While conservatives count on election cycles to persuade voters, leftists rely on compliance through coercion, mostly by way of regulatory agencies such as the EPA. Bottom line: Buy yourself a gun and plenty of ammo today!