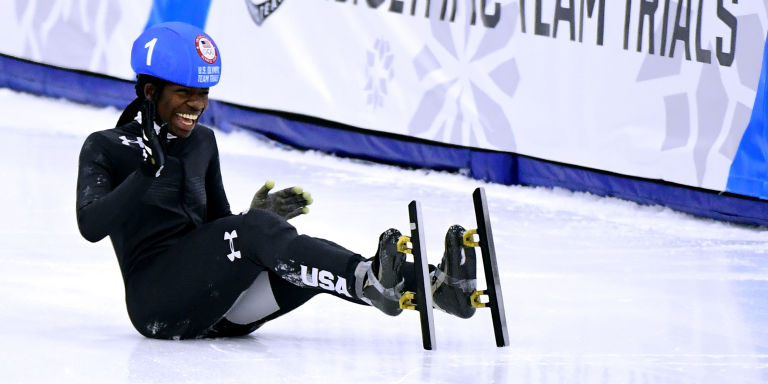 If I had waited just a few seconds longer, I would’ve missed her. Who am I talking about? Maame Biney, of course. The 17-year-old American short track speed skating phenom that just happens to be black sailed by three of her teammates in the 500-meter trials over the weekend to secure her spot in the winter Olympics. As reported by USA Today Sports, Biney “became the first black woman to qualify for a U.S. Olympic team with a pair of victories in the 500 meters.”

Maame is a native of Ghana. Her parents were amongst the 881,000 Africans from North African and sub-Saharan countries, according to the Pew Research Center, to immigrate to the United States in 2000 to pursue their American dream.

At a time when race-relations in America have declined and tensions are so high, it’s good to know that the only colors that matter when I cheer for my favorite Olympic athletes are red, white and blue, gold, silver and bronze. It’s why I’m still a sucker for the winter and summer Olympic games. Unlike any other activity, sports have a way of bringing people together for a common goal and helping us all forget our differences. It’s even easier to cheer for someone as happy as Maame Biney. Her smile and her attitude are infectious.

Whenever I have an opportunity to watch the Olympics, I feel proud to be an American. Not only do I enjoy watching the thrill of victory and the agony of defeat for our athletes in real time, there’s a sense of connection I feel towards them that’s inexplicable. Maybe it’s observing their raw emotions during their event, or maybe it’s simply knowing that in some small way, we’re on the same team – the American team. When they fail, I fail. Although they deserve all of the individual accolades imaginable for the blood, sweat and tears they’ve shed to reach the top of their field, they represent us. I’ve never taken that lightly.

I’m not ashamed to say that I love winning! Apparently neither is Maame’s dad. He was filmed in the stands holding up a sign during her second final that read: “Kick some hiney Biney.” I suspect we’ll see that sign again, along with T-shirts and buttons during the winter Olympics. You get the sense that’s why the Bineys came to America – to kick some hiney, to win! Not just in the game of sports, but in the game of life. While so many liberal African-Americans contend this is the land of “oppression,” native African’s have been moving to the land of “opportunity” in increasingly larger percentages every decade since 1970.

America has a pedigree for exceptionalism that is undeniable. In the 2014 Sochi Olympics, we captured 28 medals, including nine gold medals, second only to the Russian team, subsequently disqualified for doping. I could go on and on about our dominance in both the winter and summer Olympic games over the decades. Countries strive to become like us; people risk their lives to cross our borders with nothing but the clothing on their back and the hope of the American Dream in their hearts.

I’ll be cheering for Maame Biney, not because she’s black like me, but because she’s American like me. I won’t be alone either. During the trials, the entire skating arena, made of an almost entirely white audience, erupted in cheers for the speed skater. They didn’t care about her skin color; she was one of them – an American.