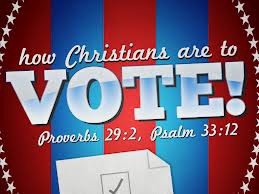 As if that weren’t depressing enough, Christians will find reasons to justify their vote for either one of the major party nominees by using Bible verses out of context, or by posing the “lesser of two evils” argument (which frankly is a tempting argument considering our two choices), or by capitulating to peers that are playing right into the hands of establishment politicians. So let me ask you: If there were a way for Christians to shape politics in America as a tool to restore a virtuous society without necessarily changing your party affiliation, would you?

Just think, what if Christians were to become our own major voting bloc – “the” swing-vote juggernaut? What if politicians had to pander to us throughout an entire campaign cycle as opposed to just the Iowa caucuses? Imagine being wooed like college-educated white women, single-moms, blacks, the LGBT community, unions and Latinos?

Let me be emphatically clear: By no means do I believe politics is a substitute for the gospel of Jesus Christ! Neither do I believe that we Christians should impose our worldview on anyone. However, the fact that America has become such a decadent culture with over 80 percent of us claiming to believe in God speaks volumes not only to our absence in the public square, but also to our inability to communicate why God is relevant in all facets of our lives – even politics.

According to George Barna of the Barna Report, 75 percent of evangelicals surveyed said their religious beliefs had the greatest influence on voting decisions – yet somehow we allow politicians in both major parties to divide us on nonessential issues. Seems to me we’re the ones that should be dictating how elected officials vote at our state capitals and the nation’s capital. We’ve given them all the power! But, it’s not too late to take it back beginning Nov. 9. They work for us, remember? It’s difficult to conceptualize that fact in an era where national elections are increasingly displacing local and state races and dominating media headlines. The idea of a government of, for and by the people has largely been eradicated through state-imposed regulations, unaccountable judges and voters (you didn’t think I’d let you completely off the hook did you?) who continue to vote for big-government politicians on both sides of the aisle.

By the time you read my next column there will be a new president-elect, and evangelical Christians will have played a large role in the outcome. There will be lots for political analysts to study and learn about this election cycle, particularly the primary season, including the overall impact of the Christian vote. In 2004 “values voters” pushed George W. Bush over the finish line to win his second term as president. Imagine being able to do that in every election! So, how do we begin?

First, we decide that character matters. The solution to a corrupt Washington isn’t necessarily an outsider or term limits. We must send men and women there who are standard bearers for decency – not perfection, no matter which side of the aisle they sit on. If they’ve had moral failings in the past but have shown both in their private and public lives that they’ve repented, forgive them. If they show a proclivity to perpetually practice bad behavior, do not elevate them into a position of leadership. If you’re not clear on what criteria to look for in a leader, the Bible provides an outline in Exodus 18:21:

This alone would disqualify both Hillary Clinton and Donald Trump. If we demand better candidates, for fear of going extinct, the parties would present them.

Secondly, as Christians we’d have to find areas of agreement on disagreeable issues. Let’s take abortion, for example. I won’t vote for any candidate that isn’t pro-life. However, whether we like it or not, there are many Christians on the left who will, despite not believing in abortion themselves. What’s the solution? How about believers on both sides of the aisle agree that Planned Parenthood or any abortion advocacy group not receive funding from the federal government? Although I disagree with the practice altogether, that’s an issue best left to state and local governments. Incremental change would positively affect the culture as a whole.

Lastly, like a bad deal on a car lot, Christians must be willing to walk away from any candidate that doesn’t pass their moral smell test – even when your peers tell you America as you know it will cease to exist. You have to be willing to walk away! That’s the only way political parties will take your convictions seriously. Otherwise, the establishment in both parties will continue to perpetuate the corruption and problems we see in Washington now.

If Christians want to reform the political culture in America, we can’t count on an “outsider” to do it. The answer to America’s ills is “We The People.”