The Carl Jackson Show and Blog
Home The Blog Political “They Can’t Breathe”: A Salute to NYC’s Finest 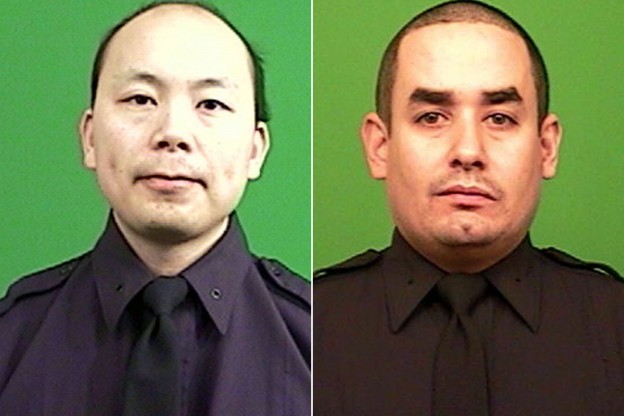 What did we expect from this chant? “What do we want? Dead cops! When do we want them? Now!” Nothing good could come out of such evil words. Two New York Police officers, Wenjian Liu and Rafael Ramos, were murdered execution style by a 28-year-old black male named Ismaaiyl Abdullah Brinsley who may have been radicalized by the Muslim Brotherhood. Additionally, he may have suffered from some form of mental illness. Frankly, I’m not sure which of the two contributed more to the shooting, but you can bet the left-wing media will make a case for the latter.

In the aftermath of the Ferguson riots it seems no cops are safe in America. Black youths are equally endangered as long as racepreneurs like President Obama, Mayor De’ Blasio, Eric Holder, Al Sharpton, Jesse Jackson and their cohorts on the Left continue to lead “conversations” on race. Brinsley may have pulled the trigger, but figuratively speaking, these racepreneurs are just as responsible for loading his weapon.

I suspect we won’t see Lebron James rockin’ an “I Can’t Breathe” t-shirt in support of New York’s finest. I seriously doubt that the players from the St. Louis Rams will hold up bullet shattered driver and passenger side car windows in protest of the heinous shooting before running onto the football field. What I can predict is increased crime in urban neighborhoods because fewer people will be inclined to become cops. Tensions and distrust between police officers and the black community will remain high– eventually invoking more phony protest and more deaths. Lastly, we know that two families have a lifetime of healing ahead of them as they attempt to make sense of it all. However, there is a solution to sending this racial wave back into the 60’s where it belongs. Hire new leaders.

Ismaaiyl Brinsley may have thought that he exacted revenge for a just cause before committing suicide. He didn’t. His death will be in vain. There’s no progress when your “struggle” is built upon a false premise. The racepreneurs that have temporarily risen to prominence during the Obama era by riling up black people will fade like a deep red t-shirt washed in hot water and placed in the dryer too many times, but the lasting damage of their efforts will wreak havoc on black communities for generations to come.

Black neighborhoods don’t need fewer cops, they need more of them. The reason is simple, fewer dads in the homes means more crime in the streets. Police in the ‘hood don’t just “protect and serve,” they babysit. Isn’t it a shame that racepreneurs and protestors may have caused the same brave cops that ran into the World Trade Centers to run away from the ‘hood?

This notion that you can have a reasonable conversation between cops and blacks on the issue of race when “leaders” like President Obama, Eric Holder and Mayor De’ Blasio have publicly taken sides is laughable. What is not laughable is a black man responding to their words by murdering officers like they’re sitting ducks. This style of leadership will only cause additional vitriol towards cops, and targeting police for violence will understandably make them anxious towards black suspects. This isn’t rocket science.

Human nature dictates not all cops will be good guys, but most of them are. They want to do a good job and return home to their families at the end of the day like everyone else. Officer Ramos’ 13-year-old-son Jaden shouldn’t have had to post this statement on Facebook:

“Today I had to say bye to my father. He was there for me everyday of my life, he was the best father I could ask for. It’s horrible that someone gets shot dead just for being a police officer. Everyone says they hate cops but they are the people that they call for help. I will always love you and never forget you. RIP Dad.”

Romans (NIV) 13:-4 tells us “For rulers hold no terror for those who do right, but for those who do wrong. Do you want to be free from fear of the one in authority? Then do what is right and he will commend you. (4) For he is God’s servant to do you good. But if you do wrong, be afraid, for he does not bear the sword for nothing. He is God’s servant, an agent of wrath to bring punishment on the wrongdoer.” Ghetto fabulous translation: if you don’t want to be hassled by cops don’t break the damn law.

Officer Ramos and Officer Liu didn’t deserve our scorn. They definitely didn’t deserve to be ambushed and have their bodies pumped full of bullets. What they deserve, what most cops deserve, are our accolades. This is coming from a former criminal.