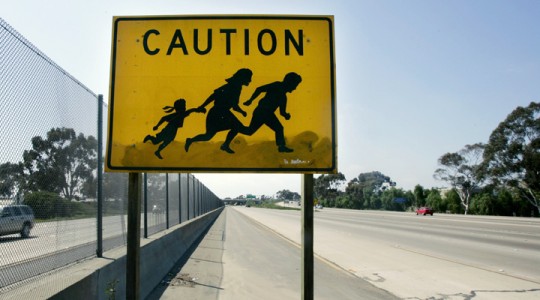 By NostraDennis
One of the best things about the United States of America is that, while we are united, different states take different approaches to matters of law and justice. Some states have a death penalty in place; others do not. A few allow their residents to smoke marijuana legally; most do not. Some have strict gun laws in place, but one town in Georgia has passed legislation mandating that its residents must own a gun. Some call this an uneven playing field. I call it the great laboratory of freedom. When a room full of high school science students each has a beaker full of chemicals and a Bunsen burner, you can guarantee that some of those students will end up spattered with goo, while others will navigate their way to success. Let’s use this to solve a few of America’s biggest problems in one fell swoop.
Mayor Cameron Hamilton of Porterville, California has a novel approach to the issue of bullying. While discussing a proposal at a recent town council meeting to create a “bully-free safe zone” for students, Mayor Hamilton summarily dismissed the idea thusly: “I’m against bullying, but I’m getting damn tired of it being used as a mantra for everything and the ills of the world. People just have to grow a pair and stick up for their damn selves.”

One of the town’s councilwomen, Virginia Gurrola, parried that thrust by saying, “It’s hard to just grow a pair when you’re a ten year old girl”. While Councilwoman Gurrola has a point, it’s worth noting that the mayor didn’t specify what exactly he wanted people to grow a pair of. Puberty results in growing different things for different ten year olds, but most of them do grow in pairs.

A safe zone in or near a school building is a great idea, because that’s the only language bullies can truly understand – a clearly marked sign, detailing exactly when and where they are not allowed to bully others. Conversely, such a sign would also detail exactly when and where bullying would be permitted. Namely, everywhere outside the carefully marked perimeter of the designated safe zone. So let’s take that idea and expand on it. Why not designate the entire United States of America as a “bully-free safe zone”? Such a bold move would show those young punks how serious we are about combating injustice on a nationwide scale.
That’s not the only thing we’d need to put on those signs, though. How about guns? It’s been scientifically proven that when a shopping mall or college campus is declared a gun-free zone, there is zero chance of a gun being fired there. Don’t even try arguing against this. The debate is over. The science is settled. The great laboratory of these United States has found that the solution to both these problems is proper signage. After all, what’s the only thing that has ever stopped a bad guy with a gun? A stern sign warning that using that gun would be wrong, of course.

While we’re busy putting these signs up all around the perimeter of our country, let’s throw in the illegal immigration issue and solve that. The only reason people try sneaking into our great nation is that they haven’t been properly educated about how wrong and illegal their actions are. Of course, the “illegal immigrant-free safe zone” sign would need to be posted in multiple languages, so there’d be no ambiguity over our sovereign rules and regulations. And airports with international arrivals would need signs posted at Customs as well.

Think of the economic impact of implementing a plan like this. We’d need to put up signs about every hundred feet or so, to make sure no one missed them, from Washington State straight across to Maine, down to the Florida Keys, and around to San Diego and back up the Pacific coast. Manufacturing these signs alone would employ hundreds, perhaps thousands of steelworkers, construction workers, translators, and proofreaders. Because there’s nothing more embarrassing that a typographical error on a “bully-free, gun-free, illegal immigrant-free sign.”

I know, I know. There are problems with this plan. The biggest one is obvious: what about Alaska and Hawaii? Simple solution. These two states have the best resources to combat these issues in other ways. Hawaii will soon welcome its native son, Barack Obama, back to the place of his birth. He’d be a shoo-in as governor if he wanted it. If not, don’t fret; Hawaii once had a king, and they might just want one again. Our president has proven time and time again that all he needs to do to make something happen is to speak it into existence. This unique skill would eliminate the need for signs all over the pristine beaches of Maui.
As for the frozen tundra of Alaska, I’d bet you those pioneers would be able to handle the occasional bully, armed felon, or illegal immigrant from Eastern Russia or British Columbia themselves, without needing a sign. If you we born and still live in Alaska, chances are, your pair is fully developed. As for the rest of us, well, here’s your sign.
———————–
NostraDennis is executive producer of The American Adversaries Drive Time, which airs weekdays at 5pm Eastern on AM 660/The Answer in Orlando, Florida, and at www.worl660.com.