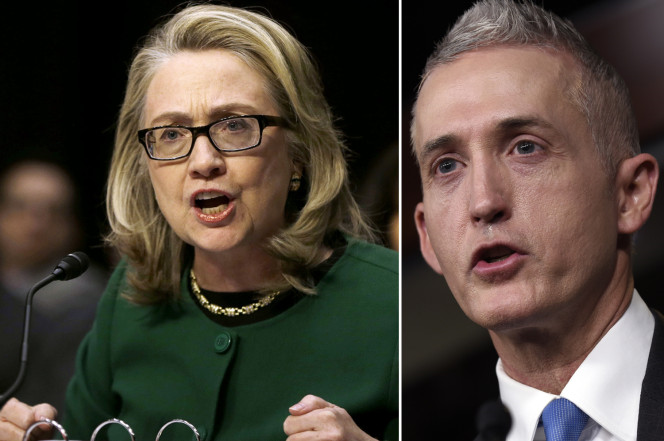 In a sane world, #LockHerUp would be more than a hashtag; it would be prophetic.

“Crooked Hillary” is great red meat for Trump’s most ardent supporters, but it’s done nothing to help his poll numbers lately, despite the fact that he’s right. Nicknames were an effective way for Trump to frame his opponents in the primary. But with a bias media backing Hillary leading up to the general election, evidence of corruption like the Benghazi scandal, revelations of the Clinton Foundation pay-to-play emails released this week by Judicial Watch, and her lies to Congress about using her personal server to conduct national security business, it all hasn’t hurt her.

Trump should be up in the polls by 10 points, even with his diarrhea of the mouth. So why isn’t he?

I’m afraid the answer is more complex than not. Can we all be honest enough to admit that Hillary’s scandals are really criminal? I’m certain anyone else would be prosecuted had we put the nation at risk and lied to cover it up. The problem is, no one voting for her cares. Why? Three reasons: 1) Democrats don’t care about morality, 2) hyper-partisanship blurs the truth and 3) government dependents don’t care where or from whom they receive their benefits.

The fundamental transformation of America is here! Once again, I must admit Democrats are brilliant! By removing God from the culture, truth and morality have become relative – the ends justify the means. Government has become God to the left. They really believe wealth redistribution is moral because, in their minds, it’s benevolent. Therefore, Hillary’s supporters don’t care that she’s a criminal because they believe she’s more moral than Donald Trump simply due to her affiliation with the Democratic Party.

Secondly, hyper-partisanship has destroyed the GOP, partly because beyond Marco Rubio (like him or not), they have no one capable of communicating their platform and their history in a simple and relevant way. All most liberals understand is “Democrats good, Republicans bad!” Rightly or wrongly, this is how we’ve been branded. Couple that with the fact that eight out of 10 journalists are liberal and perpetually bash those of us on the right, and it’s no wonder we win any election.

It never fails to amaze me when speaking with a leftist how often they’re convinced Republicans are the party of racism, bigotry and greed. They don’t see government coercion as a form of theft. In fact, they often feel it’s justified because they’ve been taught the “white man” has stolen so much from minorities. Democrats are painted as the party that’s stands up for the “little guy,” whereas Republicans exploit them. When Democrats head into the voting booth, they’re not educated on policy matters; they’re only concerned with defeating the evil Republicans.

Lastly, according to Forbes, and thanks to Obamacare, in 2014, for the first time in American history the number of adult Americans receiving government benefits surpassed those of us who aren’t. Liberals tend not to bite the hand that feeds them, even if that hand belongs to Hillary Clinton. It was a mistake for Trump to believe he could capture the imagination of disaffected Bernie Sanders voters without offering free stuff. The nation of “liberty and justice for all” has become the nation of “dependence and social justice for some.”

If conservatives are going to win in the future, we should focus on inspiring voters – not inciting them.