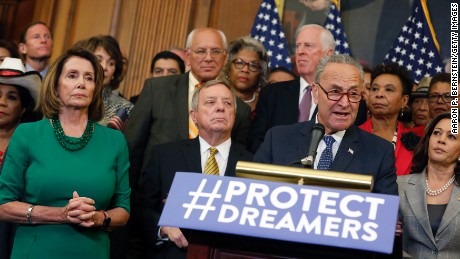 No one wants to deny “Dreamers” their dreams, but they may need to be delayed.

No matter what side you’re on in the DACA (Deferred Action for Childhood Arrivals) debate, it’s important to remember that real people are stuck in the middle. As a result, the words “compassion” and “racist” have been thrown around like a football on NFL Sunday. Politicians are concerned about re-election. Democrats need a permanent underclass to win votes, and Republicans need a border wall to satisfy their base.

There are several questions that should be answered concerning the “Schumer Shutdown”: 1) What does it mean to be compassionate when it comes to amnesty? 2) Who will be helped and who will be hurt by amnesty? 3) Why is it important to uphold the rule of law and maintain a legal immigration system?

Before answering any of these questions, it’s important to realize the only way to have a productive discussion on the topic of immigration is to avoid assuming the worst of the other side – the worst of politicians, yes, but not your neighbor per se.

The truth is Democrats and Republicans need each other. We complement each other. For those of you evangelicals familiar with 1 Corinthians 12 and Ephesians 4, which outline spiritual gifts and talents amongst Christians, it should come as no surprise to you that we all have different gifts for the sole purpose of serving God’s church and fulfilling “The Great Commission” within our own capacity. In other words, God has chosen many people to fulfill one purpose. Kinda sounds like epluribus unum, right?

Conservatives tend to be logical, and liberals are typically more emotional. Liberals often recognize public and cultural needs that should be addressed. However, generally speaking, conservatives tend to be better at solving those issues both practically and lawfully. Such is the case with the DACA showdown that emboldened Senate Minority Leader Chuck Schumer, D-N.Y., and the Democrats to shut down the government. Their plan backfired.

Webster’s dictionary defines the word compassion as “sympathetic feeling: pity, mercy.” Pay special attention to the word “mercy.” It’s an indicator that someone has done something wrong and they need to be forgiven. When liberals promote DACA without first acknowledging the offense of immigrating to America unlawfully, their compassion quickly becomes one-sided.

Think about it. Why aren’t Democrats compassionate toward the poor people, specifically low-income blacks, who will lose out on jobs simply because our immigration laws are not enforced? Why aren’t Democrats concerned about growing crime rates among illegal immigrants who migrate to American cities, as outlined by Tucker Carlson on his Fox News program last week? Where’s their compassion for those victims? Where’s the compassion for the immigrants who have sex-trafficked, or packed into 18-wheelers like sardines, only to die of dehydration before reaching America? Chuck Schumer and Democrats are hurting far more people than they claim to be helping.

People risk their lives immigrating here illegally because they recognize America offers a system of governance, freedom and opportunity superior to their country of origin. Why would we allow them to shape America into the nation they left?

Obeying and enforcing immigration law is important for several reasons. First, people immigrating here legally don’t have to risk their safety and health, unlike illegal immigrants. Secondly, laws give new immigrants time to assimilate into American culture. Lastly, it’s important we don’t flood the low-skilled job market and our welfare offices – putting undue burdens upon taxpayers struggling to get ahead themselves.

Having said that, let’s be honest with ourselves. No politician in D.C. has the spine to send illegal immigrants back to a nation many of them have never known. Therefore, the best solution to resolve the DACA debate, is for Democrats to give President Trump his border wall and enforce existing immigration law in exchange for a one-time amnesty deal for DACA benefactors – and for God’s sake stop penalizing our troops!