The Carl Jackson Show and Blog
Home The Blog Political ‘Justice’ Neil Gorsuch? Some Cause for Concern 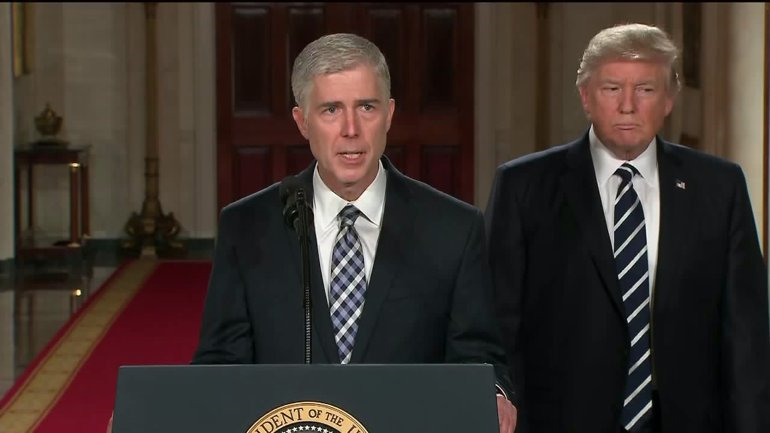 In recent days, news outlets have been reporting that 10th Circuit Judge Neil Gorsuch has now risen to the top of President Trump’s list of potential Supreme Court nominees.  He apparently replaces Judge William Pryor, who was widely reported as previously leading the pack of potential nominees.  Judge Pryor faced significant backlash from many on the right, including Evangelical Christians, criticizing Pryor’s apparent support of the radical homosexual and transgender agenda.  The danger in being the front runner for a spot on the High Court is that you receive intense scrutiny, and, as with most candidates, Judge Gorsuch is difficult to evaluate fully.

Having spent some time digging into Judge Gorsuch’s background, we have found many good indicators.  First, we should say that we personally knew his mother – Anne Gorsuch Burford, a lawyer who President Reagan appointed as Director of the Environmental Protection Agency in 1981.  And, Anne was both principled and fearless – taking many arrows in her faithful pursuit of President Reagan’s environmental agenda.  Sadly, the Reagan Administration failed to provide her the backing that she deserved, leading to her early departure from that position.  Judge Gorsuch’s distinguished maternal pedigree should not be overlooked.

As to Judge Gorsuch’s judicial record, he authored the excellent opinion in United States v. Ackerman, 831 F.3d 1292 (10th Cir. 2016) which, in an alternative holding, determined that government accessing a person’s emails constitutes a “search” under the revitalized property rights trespass test articulated by Justice Scalia in the case of United States v. Jones, 132 S.Ct. 945 (2012).  Additionally, Judge Gorsuch wrote a concurring opinion in the 10th Circuit, in what became the Hobby Lobby case in the U.S. Supreme Court, determining that the religious freedom of Christian businesses trumps the “right” of a woman to have her employer subsidize the killing of her unborn baby.  Finally, Judge Gorsuch is a vocal critic of the modern “Administrative State” — advocating the elimination of the doctrine of “Chevron deference” which has given unelected and unaccountable federal bureaucrats vast and unconstitutional power over just about every aspect of our lives.

On the other hand, there is reason to give some pause with Judge Gorsuch’s record.  Judge Gorsuch joined in one opinion, United States v. Rodriguez, 739 F.3d 481 (11th Cir. 2013), which causes us to have some concern about his understanding of the relationship between the government and an armed citizenry.  To be fair, Judge Gorsuch did not write the Rodriguez opinion — his colleague, Judge Bobby Baldock was the author.  Nevertheless, Judge Gorsuch joined the opinion.  He could have filed a principled dissenting opinion, or even a concurring opinion agreeing only in the judgment.

The facts of the case are these.  A New Mexico policeman observed Mr. Rodriguez, a convenience store clerk, carrying a concealed handgun.  Carrying a concealed loaded handgun is illegal in New Mexico without a permit, but legal if one has a license to do so.  The officer, however, upon seeing a Rodriguez’s handgun, detained him, then — acting first and asking questions later — forcibly disarmed Rodriguez.  After finding out that Rodriguez did not, in fact, have a license to carry and, indeed, was a convicted felon, the officer placed him under arrest.

Of course, hard cases make bad law.  But the precedent from the Rodriguez opinion will affect police-citizen relations in New Mexico, and possibly elsewhere in the Tenth Circuit, for many years to come.  Not bothering to figure out the legality of Rodriguez’s firearm before detaining and disarming him, the officer’s initial actions would have been the same even if Mr. Rodriguez had been a lawful gun owner.

According to the 10th Circuit’s opinion, the police are justified in forcibly disarming every armed citizen, based on nothing more than the presence of a concealed firearm.  This allows the police to treat every law-abiding gun owner like a criminal — which, in many cases we have seen, includes rough treatment such as grabbing him, twisting his arm behind his back, slamming him down on the ground, and handcuffing him.  Far too many police officers do not like anyone to be armed other than themselves, and have taken it upon themselves to intimidate those who dare to exercise Second Amendment rights.  Under the Rodriguez decision, only after being forcibly disarmed and detained would a citizen be entitled to demonstrate that he was lawfully exercising his Second Amendment rights.

The Circuit Court based this decision on Terry v. Ohio, 392 U.S. 1 (1968) — the “stop and frisk” doctrine.  One of the holdings from Terry is that, if the police have “reasonable suspicion” that a person is both “armed and dangerous,” they can temporarily seize his weapon to keep everyone safe.  Of course, anyone with a smidgeon of common sense knows that just being an “armed” law abiding citizen does not also make a person “dangerous” any more than a police officer with a gun should be considered dangerous.

Unfortunately, the Rodriguez opinion allows the police to conflate the two concepts, and treat all armed persons as if they were automatically dangerous.  According to the panel opinion joined by Judge Gorsuch, the mere presence of a loaded concealed firearm “alone is enough to justify [the officer’s] action in removing the handgun from Defendant’s waistband for the protection of himself and others.”

To be sure, Rodriguez did not raise a Second Amendment claim before the court, and the court cited various Fourth Amendment cases to justify its bad decision.  But judges cannot completely hide behind precedent.  Judge Gorsuch was free to express his disagreements with those precedents, even if he felt obliged to concur in the result.  But that is not what he did.

Fortunately, the Framers disagreed, emphasizing in the Second Amendment that an armed populace was not only beneficial to — but indeed “necessary to” — the preservation of a “free state.”  Unfortunately, in almost all of the countries of the world, the government considers an armed citizen to be a threat.  But in the United States, the police should consider an armed citizenry to be one of the sources of strength of the nation.  It is hard to imagine a better way to discourage law-abiding people from carrying guns than to do what the 10th Circuit did, and sanction the police forcibly disarming anyone seen carrying a gun.

At the end of the day, a single opinion such as this is not enough to derail a Supreme Court nomination, especially since Judge Gorsuch did not even write the opinion.  But he certainly did join the opinion.  And if he is nominated to the High Court, a pro-gun United States Senator or two should most certainly inquire as to this decision, and ask Judge Gorsuch to explain whether he really believes that the police should be free to treat all armed citizens as though they were dangerous criminals.

Editor’s Note: This piece was originally published by the American Thinker.