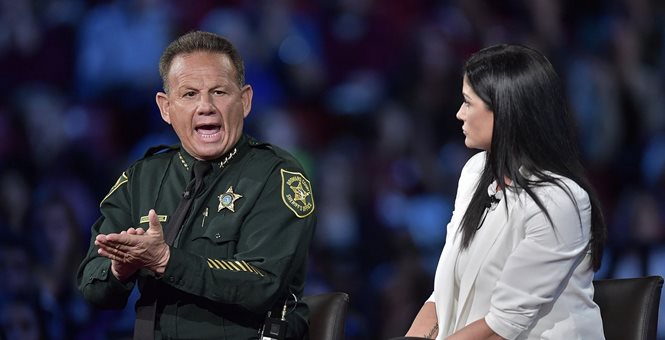 The Marjory Stoneman Douglas High School Public Safety Commission stirred up controversy last week when they erred on the side of common sense and the Second Amendment. The Commission investigating the so-called “Valentine’s Day massacre” that left 14 students and three teachers dead and another 17 people wounded recommended that teachers who were willing to volunteer undergo background checks, psychological evaluations and training be allowed to carry concealed firearms on campus.

Opponents of the recommendation argue that armed teachers wouldn’t stop mass shootings and that it’s a bad idea that would make students less safe. They feel teachers should be teaching, not playing Robocop. Some of them have asked the questions, what if a teacher goes crazy and shoots a student? Or, what if a teacher is so inept with a gun that he accidentally shoots anyone who may be in the way? They believe guns are better off left in the hands of trained professionals such as cops and military personnel. But are they right? I don’t think so.

First off, the only things that separate an armed cop from an armed teacher is training and permission to carry. There’s nothing a cop can learn about firing a gun that a teacher cannot. Additionally, teachers tend to be patient, caring and protective of their students. It’s no wonder so many have stood in the line of fire in school shootings. You may recall that instead of engaging Nikolas Cruz in a firefight, it was the Broward County deputies themselves, led by Sheriff Scott Israel, that hid behind their vehicles and school walls while students at Marjory Stoneman Douglas were executed by the killer. Several staffers courageously stood between the shooter and their students. They were the first line of defense for those kids.

Now that you know my arguments, let’s unpack them further.

First, training. Police who are trained in firearms may have an advantage over the average citizen, but not necessarily over an avid gun enthusiast who visits a range frequently. If a policeman freshens up on his skills monthly, but his neighbor goes to the range weekly, who has the advantage over whom? Wearing a uniform and having the authority to carry a firearm doesn’t determine someone’s skill level when it comes to shooting.

Secondly, we all have fond memories of our favorite teacher growing up. I’m sure you can remember that teacher who took the time to give you words of encouragement that made you believe your dreams were possible. They realized your potential even before you did. Remember that teacher who wasn’t afraid to call your parents if it meant they could get better results out of you because they knew you were capable of more? We all can remember those teachers that simply showed they cared. Now, imagine one of those teachers voluntarily undergoing a psychological evaluation and firearms training to protect you from harm in the unlikely event of a mass shooting. Do you think they’d hesitate to take a bullet or fire one to protect your child from a shooter if they had to? I don’t. They have a bond with their students that cops never will.

Lastly, if you add firearms training to teachers’ natural proclivity to be caring and pragmatic, it’s highly unlikely they’ll snap and go on a shooting rampage themselves. Never mind the ridiculous notion that they’d be so inept with a gun that they’d shoot everyone in sight but the bad guy. If teachers were capable of committing mass shootings in schools, we’d be hearing about a growing epidemic of teacher shootings! Especially, given all of the bad-behind kids they have to deal with nowadays! Think about it. How easy would it be for a teacher to sneak a gun on campus and shoot someone? Extremely easy. Yet, we don’t hear about that happening.

Furthermore, with all due respect to our cops, their suicide rate compared to teachers are off the charts! Yet, we trust them to protect our communities with firearms. According to a 2016 column in the Atlanta Journal-Constitution titled “Teachers have the lowest suicide rate,” a Center for Disease Control and Prevention report revealed that “the suicide rate among people in education, training and library was 7.5 per 100,000 workers. That’s the lowest among all 22 occupations included in the report.” The highest suicide rate, particularly with women, were seen amongst police officers, firefighters and correction officers due to on-the-job stress and isolation from communities.

The bottom line is this, if we want to get serious about protecting our kids from mass shootings while they’re in school, we should develop standard school safety requirements across the country – including metal detectors where necessary and mental screenings for kids that have shown repeated violent and threatening behavioral patterns. There should be a minimum of one school safety officer on campus trained to engage a mass shooter where possible and diffuse less-violent scenarios. And last but far from least, we need to arm teachers who are willing to voluntarily undergo firearms training and psychologically examinations.

We trust teachers with our kids’ futures. Why not their lives?