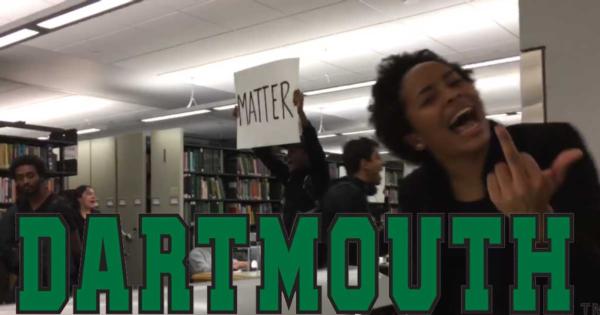 When conservatives speak about the three “Rs” of education, we’re referring to reading, writing and arithmetic. When leftists speak of them, they’re referring to racism, revolution and redistribution. And, if you don’t succumb to the demands of protesting spoiled brats like we’ve seen recently at the University of Missouri, Yale, Ithaca College and others, you’re likely to invoke an additional “R” for bonus points – rioting.

If you listen to my show regularly, you’ll often hear me say, “If you have the wrong information, you’ll arrive at the wrong conclusion.” Many university campuses today are filling their students’ minds with a plethora of misinformation. Institutions of higher learning and critical thinking have become little more than indoctrination camps for the Democratic Party. I’m not certain that you could find an era in American history where so many of our youth with high IQs are so dumb and lack common sense.

What’s even worse is when these new little socialist butterflies leave their socialist cocoons called college, they disseminate their anti-American, anti-capitalism propaganda throughout their new found places of employment. If they graduate with a journalism, teaching, business marketing, science or even a sports degree, just to name a few, imagine the effect they’ll have in the propagation of their worldview across the country – not to mention, across all socioeconomic classes.

Frankly, it’s no wonder urban areas tend to be less politically informed and vote heavily Democratic – they expect people who are “successful,” the people who have “made it,” to be more politically informed than they because they have a bachelor’s degree, master’s or doctoral degree. Essentially, they’re elitists with credentials. However, often times these people are less informed because they’ve lived in a socialist bubble for at least four years of their impressionable lives, while being coddled and brainwashed by their leftist professors.

Critical thinking at our universities has been replaced by groupthink. Students aren’t taught to think “out of the box,” but rather not to deviate from the box.

Nationally syndicated radio talk-show host Dennis Prager wrote a column this week titled “American universities begin to implode.” In his column, he described a list of “microaggressions” for the students and faculty of the University of California to avoid, lest they risk engaging in racism or bigotry. One of the examples he gave was this one:

“America is the land of opportunity.”

Prager goes on to explain, “According to the University of California, this is a ‘myth’ that is also racist. It implies that some of those who fail do so not because they haven’t had opportunities to succeed but because of their failure to take advantage of those opportunities.”

Did you catch that? In other words, immigrants from around the world and conservatives who coincidentally look like you and me – who happen to believe “America is the land of opportunity” – are racist for believing blacks should take advantage of the same opportunities as the rest of us.

Allow me to point out the obvious. Many of the minority spoiled brats, who are coddled by the white spoiled brats who often run our universities, attend undergraduate programs that cost more, or as much, per year as 85-90 percent of what the American labor force makes in a year!

According to the National Center for Education Statistics, between 2000 and 2013, the percentage of black college students rose from 11.7 to 14.7. During the same time period, the percentage of Latino student attendees rose from 9.9 to 15.8. Currently, females account for the majority of college students: About 11.5 million enrolled for the 2015 fall semester compared with just 8.7 million males.

How do we stop or slow this leftist onslaught of insanity being perpetrated upon our kids? It’s time to starve the leftist beast. Unless, you’ve vetted a college or university thoroughly, or unless your kid is advancing in STEM (science, technology, engineering, math) law, medicine or a specifically defined and skilled profession, consider trade schools or a start-up business. Who knows – like Steve Jobs, Bill Gates, Glenn Beck or Rush Limbaugh, all of whom dropped out of college – maybe your neighbor’s college kid will work for yours one day.