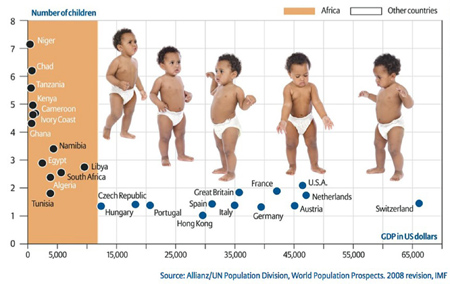 The sexiness of fertility rates

According to an article by James Pethakoukis of the American Enterprise Institute (AEI) entitled “Should America welcome its falling fertility rate?” there are no examples of a nation that has dipped below a sustained 1.5 fertility rate returning to its replacement rate. Currently, America stands at a 1.9 fertility rate. Abortion isn’t just a moral issue; it is an existential threat to our nation. China is the latest example of a country that has realized the error of its ways, when its leaders recently decided to change their decades long one-child policy to a two-child policy.

As a Christian, I don’t expect pro-abortionists to share my pro-life values. However, anyone with a modicum of common sense and an honest bone in their body should be able to understand why it’s important for a civilized nation to support God’s definition of marriage: one man, one woman. Gays can’t create taxpayers that keep welfare programs sustainable, and this is a dilemma for the left.

Democrats are hypocrites when it comes to the issue of promulgating “life,” and here’s how they get around it. They support the two “a” words: abortion and amnesty.

Proponents of illegal foreigners are a large voting bloc for the left, as are pro-abortionists. Under the guise of “compassion,” liberal politicians pretend as though they care for the down trodden. In reality, because they’ve intentionally segregated so many voting blocs of people, they must use varying policies to hide the flaws of others; such is the case with abortion and amnesty.

I’m convinced that leftists, particularly the elitists of the Democratic Party, understand the importance of maintaining life – not just for basic societal and economic purposes, but for the existential survival of our country. Don’t be fooled. They understand their policies are largely responsible for destroying the traditional family – the building block of society and the one voting bloc they despise. However, in order to maintain their power base in Washington, D.C., and state capitols around the country, they attempt to convince us that their immoral policies are moral.

Do you recall just last week when Senate Democrats fought so vehemently to retain federal funding for so-called “sanctuary cities”? Primarily Democrat-run cities that are safe havens for illegal foreigners? These cities will not enforce federal immigration laws, despite growing concerns of some illegal aliens refusing to assimilate and committing criminal acts of violence upon American citizens. Leftists argue that as a “nation of immigrants” we should be sympathetic to the plight of those that have broken our border laws. If you believe as I do, that leftists are deceptive, then you have to consider that perhaps they simply want to replace the babies they’ve helped to kill by replenishing their voter base. Seriously, one can’t expect to kill his constituents and then receive their vote – although Democrats have managed to pull that off before.

In addition, I’d like you to recall Gov. Jerry Brown of California signing the Reproductive FACT Act just weeks ago. This piece of legislation will force pro-life pregnancy crisis centers and state-licensed medical clinics in California to distribute and post information on where pregnant moms can go to kill their babies at taxpayers’ expense. This law gives no regard to the spiritual, psychological, or physical damages it places on women. Instead, it simply satisfies yet another voting block in exchange for more Democratic power.

Carl, what’s so sexy about this information? The answer is nothing. But now you’re empowered to give an account for the reasons you’re pro-life, not just on a spiritual level, but on a practical one.

Amnesty will destroy our nations sovereignty. Abortion is destroying our soul. There’s gotta be something sexy about putting a stop to both and saving our nation. At least, I think so.