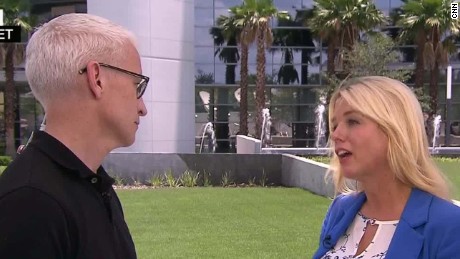 I’m a resident of Orlando, Florida, which is now home to the worst shooting massacre in modern American history. What I’ve learned this week, besides the fact that none of us is safe from ISIS sympathizers, is that Orlando is not united and Christians aren’t allowed to feel empathy for loved ones of the helpless victims that were slaughtered by an Islamic terrorist. Even though we do.

When Florida Attorney General Pam Bondi was ambushed by CNN’s gay activist Anderson Cooper, because she once supported a federal marriage amendment for traditional marriage, it became clear that the advancement of the gay agenda took precedent over the victims of the Pulse nightclub shooting. Talk about wrong time – wrong place, Anderson. Grief isn’t political! Are homosexuals capable of having compassion for a heterosexual murder victim? Of course! We’re all human! Besides, a mom and dad conceived all of us at one point. So, please explain to me why promoting male-female marriages is bad or hateful. Not to mention, what the heck does traditional marriage have to do with a massacre by an Islamic terrorist?

My friend John Stemberger experienced the same type of vitriol as Pam Bondi. He’s president of Florida Family Policy Council, best known for the “One Man One Woman” legislation Floridians supported overwhelmingly, before it was overturned by an activist judge. After the shooting, John received some of the most hateful, judgmental and nasty messages and emails from gay activists and Democrats who couldn’t fathom how a Christian could hate the sin, but love the sinner. John’s crime? Reminding Christians in a newsletter to grieve with those who grieve, mourn with those who mourn, and pray for the families of the victims of the shooting. Parent to parent, is it so hard to imagine a parent, whether of a straight or gay child, being able to empathize with a parent of a child murdered in cold blood?

Gay bigotry isn’t spoken of enough, but it should be. On one of our more popular local radio shows, I’ve listened to testimony after testimony from witnesses of the shooting and those who were adversely affected. Survivors, their families and friends have been coveting prayers from others. Yet, people like Anderson Cooper saw fit to politicize and shame others that don’t happen to share his view on sexuality. You would think he’d be more focused on the actual terrorist attack. I’ve got news for Mr. Cooper. When I heard about innocent lives being taken senselessly, it didn’t matter to me who they were having sex with! I don’t like segregating people by groups like the left does. After the San Bernardino massacre, there were two questions on my mind: How could we allow this to happen again, particularly when the FBI had this guy on their radar? And, what could I do to help the victims? I’m not alone. Everyone in my circle was asking the same things.

So what do we do with people in the gay and lesbian community that choose to politicize a crisis rather than accept our genuine empathy? Personally, I’m not going to allow bigots like Anderson Cooper to tell me whom I should have compassion and empathy for, who I should love on and pray for.

First, we have to refuse to buy into this high-school nonsense, that acceptance equates to love. To the contrary. Sometimes, loving a person means when you have to refuse to accept behavior that you know could hurt them or others. To take it a step further, as Christians we have an obligation to share the Gospel in hopes that people will accept the love of Jesus Christ, repent of their sin and eventually turn away from anything that would grieve the heart of God and ruin their chance to live an eternal life in heaven.

Secondly, as Christians we have to stop acting like our poop doesn’t stink. Stop expecting non-believers to act like believers, and love them where they are, step back, and let the Holy Spirit do His thing. Before Christ, we were all sinners. However, because of His death on the cross, we’re free from the wrath of God the Father. That’s not an excuse to sin; it’s the reason we should love others. It’s also the reason why we can grieve the death of the Pulse nightclub shooting victims even more fully than Anderson Cooper could ever imagine. As evil as this massacre was, it gives Christians an opportunity to express their love in prayer, financial generosity where appropriate, and serving our neighbors.

Don’t allow gay bullies to dictate the terms of your compassion. Christians don’t go around demanding an aberration from “gay values” before we serve others in a crisis. In the name of “equality,” perhaps activists like Anderson Cooper should do the same.